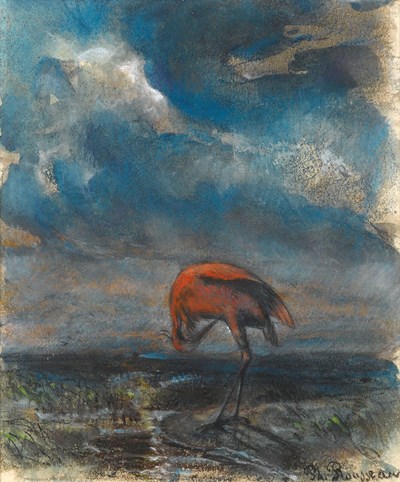 A Red Stork in a Landscape Sold


This vibrant watercolour is a fine example of the way in which Rousseau could depict animals in their own right, without any apparent reference to fables or literature. The delicately rendered stork stands preening in a barren marshland, seemingly disinterested in the storm that rages overhead. Here Rousseau is spontaneous and perceptive. His use of a combination of watercolour and pastel display the freedom and ease with which he portrayed animals. Rousseau depicted storks in a number of paintings, including Storks and a Peacock near a Pond, signed and dated 1863, which appeared at auction in London in 1966 and a painting illustrating the fable of The Fox and the Stork, sold at auction in 1991. A painting of storks was also among the decorations commissioned from Rousseau for the dining room of James, Baron de Rothschild and shown at the Exposition Universelle in Paris in 1855.

A Red Stork in a Landscape