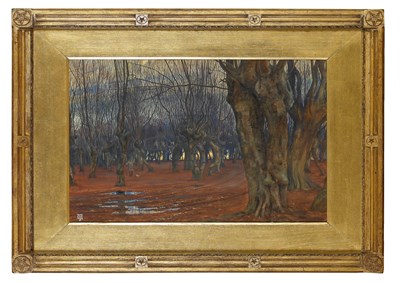 
Epping Forest is an area of ancient woodland, comprising nearly twenty-four square kilometres, located along the eastern edge of London, on the border with Essex. The forest today is the remnant of the former Royal forest of Waltham, established by King Henry III in the 12th century, and popular with Henry VIII and Elizabeth I for hunting. At the end of the 19th century responsibility for the forest was transferred from the Crown to the City of London Corporation. The Epping Forest Act of 1878 allowed for greatly increased access to the forest, which was formally opened to the public by Queen Victoria in 1882. Two years later one of the first comprehensive guides to the forest and its features was published by Edward North Buxton; the book proved immensely popular and was reprinted several times. At the time that Tristram Ellis produced this watercolour, therefore, Epping Forest had only recently been made accessible to all. Undoubtedly intended as a finished drawing for sale to a private collector, the present work is exhibited in a contemporary frame. The artist’s particular interest in Epping Forest is seen in the existence of another highly finished (albeit unsigned) watercolour view in the forest, of similar dimensions and technique to the present sheet but seen from another vantage point and with different staffage, which appeared at auction in London in 2007.