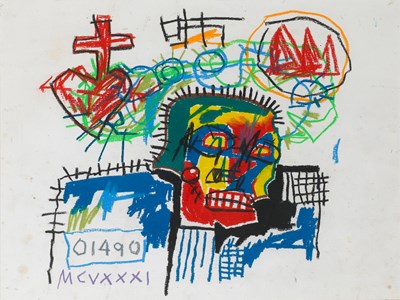 
Datable to 1981, the year in which Basquiat moved from the street to the studio, the present sheet is an impressive and vibrant example of the artist’s draughtsmanship at the onset of his rise to fame. The skull was a particularly favourite motif of the artist’s, and appears often in both paintings and drawings, often accompanied by words and combinations of letters and numbers. As Robert Storr has noted of Basquiat’s imagery, ‘Heads, often skulls, chant his words. Or rather inhale and exhale them through gritted teeth, as if sucking in the variously dense or diffuse atmosphere they create, only to cough it out again in great gusts.’ The crown drawn in red at the upper right is another motif Basquiat used extensively from around 1982 onwards, and is a legacy of his days as a graffiti artist; this ‘personalized, even trademark, image of a three-pointed crown…often accompanied a figure but occasionally appeared on its own throughout the remainder of the artist’s career.’ The symbol of a heart with a cross also appears in several other works by Basquiat, such as the painted triptych Speaks for Itself of 1982 in the Mugrabi collection. The curator and critic Robert Storr has written of Basquiat’s drawings that, ‘Scarred, torn and trampled, much of his work on paper bears the direct imprint of his urgency. Drawing, for him, was something you did rather than something done, an activity rather than a medium. The seemingly throw-away sheets that carpeted his studio might appear little more than warm-ups for painting, except that the artist, a shrewd connoisseur of his own off-hand and under foot inventions did not in fact throw them away, but instead kept the best for constant reference and re-use. Or, kept them because they were, quite simply, indestructibly vivid.’