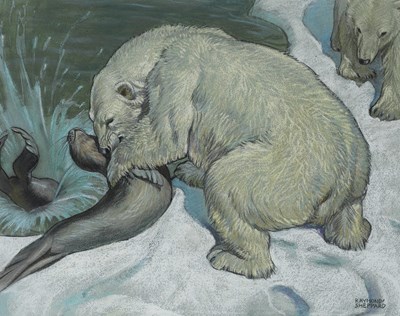 
This striking study of a polar bear and seal is a splendid example of Sheppard’s abilities as a wildlife artist, and of his mastery of the pastel medium. His natural rendering of the polar bears and their power over the seals is simply yet assuredly drawn, and with a few flicks of pastel he has captured the strength and beauty of these powerful creatures. Polar bears seem to have been a particular favourite subject of the artist, while further studies of seals can be found in Rowena Farre’s Seal Morning, one of the many books illustrated by Sheppard, which includes several charming sketches of seal pups and their mothers.

Provenance:
The estate of the artist.