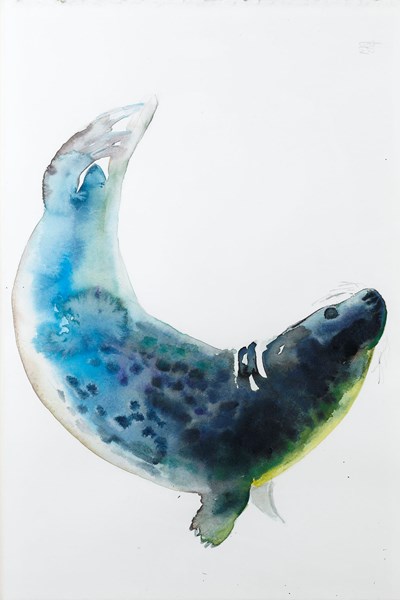 
Drawn in 2004.The present sheet may be grouped with a series of watercolours of seals, otters and other marine animals exhibited in London in 2004. In an introduction to the exhibition, Adlington commented on the sources of this particular series of drawings: ‘Growing up on one of Ireland's wildest and most varied western shorelines I took the other inhabitants of our magical bay entirely for granted. It was only later that I realised not all seas were populated by seals, otters, kingfishers, wild swans, cormorants, curlews, gannets, and puffins. Our bay was rich in life from the tiniest shrimps to the massive basking sharks that occasionally patrolled the coast in summer. A childhood of swimming with harbour seals, and staring abstractedly into rock pools left me with a capacity never to be bored in the presence of nature. Four years in Scotland only added to this love affair with the Celtic shore, and gave me a chance to explore the myriad islands of the North West. I spent a month on the Isle of Rhum and more recently fulfilled a life-long ambition to sail to St. Kilda, the most spectacular and remote of all the Western Isles...Art School was a frustrating battle between a fascination with wildlife and a desire to paint the strong spirit of the Kerry coast. At the time it never occurred to me that the wildlife of the Atlantic fringe could be a way of marrying both preoccupations. Watching a wild otter fishing the incoming tide on a spring morning; playing staring matches with seals in the bay: these are experiences which leave me elated and awed in equal measure. Yet in terms of painting, these sights were usually too fragmented to present an opportunity for an artist. From above the surface you are seeing only half the picture.Two years ago I was in a wildlife reserve in France and had the luck to witness the underwater courtship dance of European otters in a glass-sided, water-filled enclosure. The national seal sanctuary in Cornwall was able to perform the same miracle for me, and I could watch the animals I had known all my life, weightless as astronauts, cavorting underwater before being released safely back into the wild once weaned and healthy again. Watercolour seemed the obvious answer for a world defined, created and dependent upon that element. I found that the random coming together of pigment and water perfectly echoed the organic variety and movement inherent in any meeting of land and sea, bringing together the landscape that I loved and the animals that I grew up with.’ (Mark Adington, ‘Shorelines: A Personal Account’, in London, John Martin Chelsea, Mark Adlington: Shorelines, May-June 2004.)