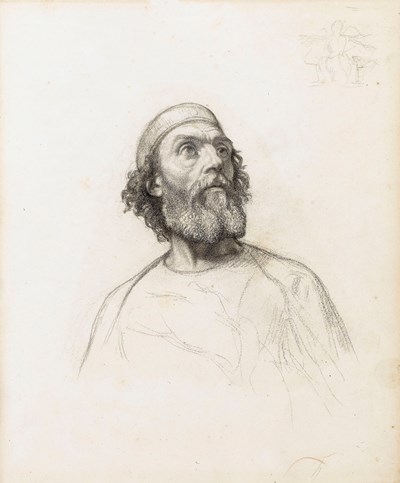 Study of a Bearded Man Sold


The present sheet cannot be connected with any surviving painting by Paul Delaroche, although it may compared with similar genre studies that seem to have been made on a visit to Italy between 1834 and 1835. On this trip he drew a number of studies of contemporary Italian peasant types (one such example, comparable to the present sheet, is in the British Museum), and was perhaps thinking of including such figures in the planned mural decoration of the church of La Madeleine in Paris with scenes of the life of Saint Mary Magdalene; a commission that Delaroche, however, eventually declined. The drawing may also be compared in spirit and type with a series of portrait oil sketches of the monks at the monastery and hermitage at Camaldoli in Tuscany, where Delaroche worked for several weeks in 1834.The portrait engraving by Delaroche on the backing board depicts the engraver and medallist Jean-Jacques Barre (1793-1855). Barre was appointed graveur général at the Monnaie de Paris in 1842 and remained in this position until his death, designing French medals, banknotes and postage stamps. The engraving was used as the basis for a posthumous portrait medallion of Jean-Jacques Barre, engraved by his sons Desiré-Albert and Jean-Auguste Barre and struck in 1855.Although Delaroche did not engrave any medals himself, he produced a handful of medallion portrait drawings of this type. Related to the present sheet is a medallion drawing by Delaroche of one of Barre’s sons, the engraver Desiré-Albert Barre (1818-1878), also signed and dated 1843, in the collection of the Musée de la Monnaie in Paris. (Albert Barre was a pupil of Delaroche, and succeeded his father as general engraver at the Monnaie de Paris.)

Study of a Bearded Man