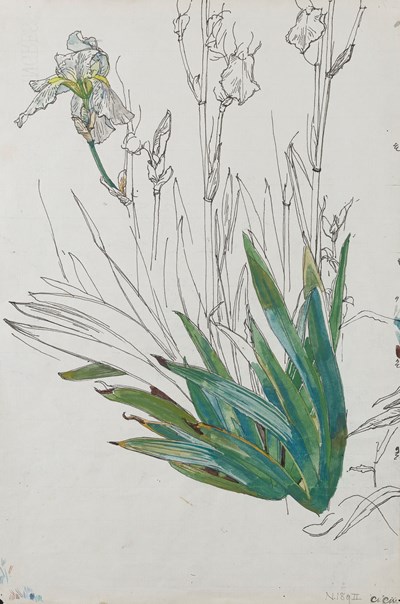 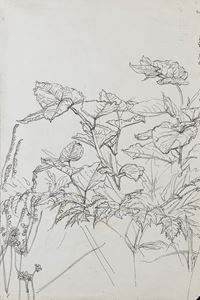 
This sketch of Irises perfectly illustrates Charles Mahoney’s in-depth knowledge and understanding of plant life. The ink strokes are quick, confident and yet extraordinarily detailed. On the verso we can see how he used to deliberately place each leaf on a page – seemingly spontaneously but in actual fact carefully thought out. Mahoney seems to have largely turned to making drawings such as the present sheet in the years following his series of mural decorations, and while working as an art teacher. As his friend and fellow painter Bernard Dunstan recalled, ‘Charles was doing a number of quite large drawings of plants…with the pressure of teaching, and the continual travelling by train that it incurred, he concentrated his energies on these superb drawings…They have great directness and objectivity and yet great warmth of feeling. They make most drawings of plants, seem by comparison, weak or merely botanically accurate…I can think of very few recent artists who have drawn plants with the vigour and understanding that Mahoney brought to them.’ Dunstan further recalled of Mahoney that ‘Anyone who watched him draw will remember the concentrated deliberation and thoughtfulness of his line. His eye absorbed in the growth and structure, his pencil would remain poised over the paper until the precisely ‘right’ line flowed from it…There is no gestural ‘freedom’, no flourish; the curvature of a leaf or a stem is too subtle and strong to be described by mere approximate curves. Every curve is different and changes subtly through its length…These studies seem to me to be drawing on the highest level – they are drawings which, by deeply felt and particularized observation, expose the natural rhythms, the forces underlying the structure, and set them out in a constant whole.’

Provenance:
By descent to the artist’s daughter, Elizabeth Bulkeley.