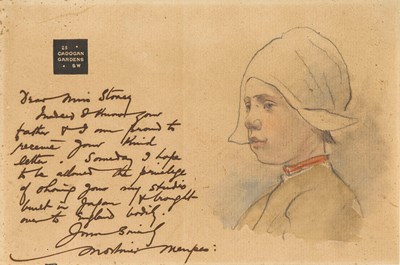 An Illustrated Letter, with the Head of a Young Breton Girl Sold

Pencil and watercolour, on the artist’s headed notepaper with the address 21 / Cadogan Gardens / SW. Signed and inscribed by the artist ‘Dear Miss Stoney / Indeed I know your / father & I am proud to / receive your kind / letter. Someday I hope / to be allowed the privilege / of showing you my studio / built in Japan & brought / over to England bodily. / Yours sincerely / Mortimer Menpes.’ on the left half of the sheet.132 x 196 mm. (5 1/4 x 7 7/8 in.)


In this letter, Menpes refers to his studio in London. As a contemporary article noted, ‘Mr. Mortimer Menpes, the well-known Australian painter, during a recent visit to Japan made an especial study of Japanese house decoration and, armed with the plans of a house constructed for him in Cadogan Gardens, London, in which the fittings and decorations had not been completed, he set himself the task of superintending the construction of a complete range of fittings, each detail of which should not only be designed but actually made by a Japanese craftsman; the whole being so constructed as to be readily taken to pieces, packed, and put together again in London.’ (‘Mr. Mortimer Menpes’ House. An Experiment in the Application of Japanese Ornament to the Decoration of an English House’, in an unknown English magazine [The Studio?], p.172.)The drawing illustrates the typical headdress of Breton women; in 1905 Menpes published an illustrated book on Brittany, accompanied by text by his wife Dorothy.

An Illustrated Letter, with the Head of a Young Breton Girl