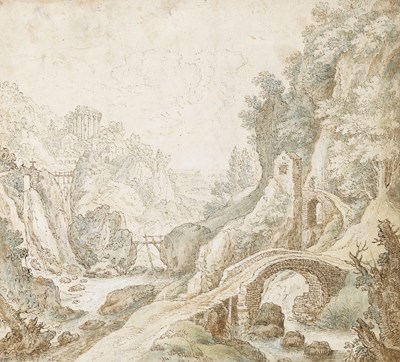 An Italianate River Landscape with Bridges in the Foreground, a Temple in the Distance Sold


Long attributed to Paul Bril (1553-1626), the present sheet is in fact derived from a small painting on copper by Bril, signed and dated 159(9?), in the Wallraf-Richartz Museum in Cologne which, however, includes figures and animals crossing the bridge in the foreground. (The temple at the upper left of the composition is strongly reminiscent of the Temple of the Sibyl at Tivoli.) An engraving after the painting, in reverse and with the addition of a rainbow, was produced by Raphael Sadeler II.As Louisa Wood Ruby has noted of Joos de Momper, ‘Many of his drawings and paintings from [the mid-1580’s] have structures that relate to Bril’s work, or include motifs found in the Bril repertoire…Although his penmanship remained unaffected by Bril’s, the numerous examples of Bril’s influence indicate that De Momper was connected to Bril in Rome, and as Ertz has suggested, may even have executed frescoes under him.’

An Italianate River Landscape with Bridges in the Foreground, a Temple in the Distance