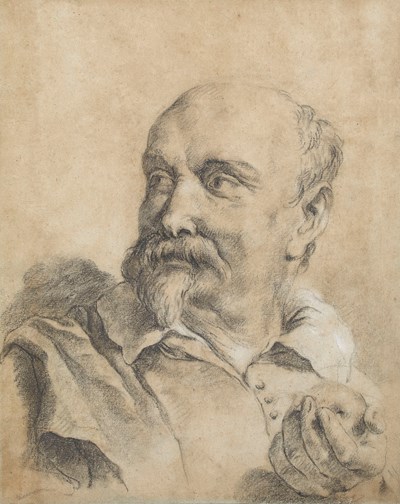 
Domenico Maggiotto was one of the artists known as the ‘Piazzetteschi’ for their dependence on the example of their teacher Piazzetta. Apart from Maggiotto, these artists included Giuseppe Angeli, Giulia Lama, Antonio Marinetti and Francesco Polazzo, and all produced drawings and paintings that have at times been confused with those of Piazzetta. This is particularly true of the chalk drawings of heads known as teste di carattere; large-scale, highly finished studies of heads drawn in black and white chalks on blue, brown or grey paper. Among Piazzetta’s most celebrated drawings were a series of such teste di carattere, produced as independent works of art, to be framed and glazed for display. Indeed, the fact that Piazzetta’s reputation outside Venice was well established by the early 1720’s can be credited to the fame of these drawings, many of which were engraved.Piazzetta established a drawing school in Venice, in which Maggiotto is known to have enrolled in 1722. The success of the master’s teste di carattere would have led his students and assistants to produced similar drawings as studio exercises. Although the correct attribution of such teste di carattere among the pupils of Piazzetta remains problematic, the present sheet may be attributed to Maggiotto. A stylistically similar group of such head studies by Maggiotto is in the collection of the Museo Correr in Venice.Although the present sheet may be thought to record a drawing by Piazzetta, no such prototype is known. Instead, as Michael Burrell has kindly pointed out, Maggiotto seems to have derived the physiognomy, pose and costume of his subject from a portrait etching of the painter Jan Snellinck from the Iconography series of Anthony Van Dyck.

A Bearded Man Holding an Apple