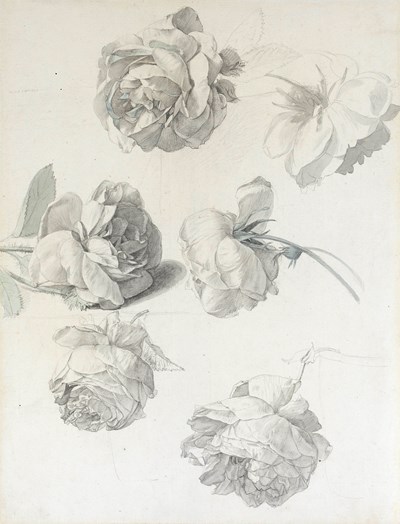 Pencil, with gray and pale green washes, on light brown paper. Faintly and indistinctly inscribed in pencil near the upper left corner. 370 x 282 mm. (14 1/2 x 11 1/8 in.)Watermark: Fleur-de-lys above a shield.


Berjon’s paintings and drawings are characterized by a meticulous technique and an attention to detail. Flowers and fruit are depicted with a great deal of scientific accuracy, the result of the artist’s studies in the botanical gardens in Lyon. Also typical of his work are restrained, uncluttered compositions and a particular delicacy of touch. As one modern scholar has noted of Berjon’s flower pictures, ‘One rarely finds in his own compositions the clever constructions of bouquets which were then so fashionable. Berjon preferred simple compositions, in which flowers and fruit are presented directly with some of that scientific precision, a characteristic of this genre of which he was in complete command, as well as a lively sense of the limpid atmosphere and soft light conducive to the harmonizing of delicate tones.’ This superbly drawn study of six roses belonged to the still life and landscape painter Eliot Hodgkin (1905-1987), who with his wife assembled a small but choice collection of paintings and drawings. According to a note on the old frame backing board, the attribution of this drawing to Berjon was first suggested by the critic Harley Preston, author of a brief account of some of the French paintings and drawings in the Hodgkin collection, published in 1985.