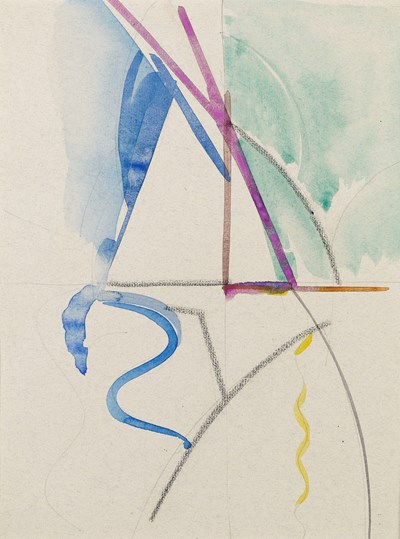 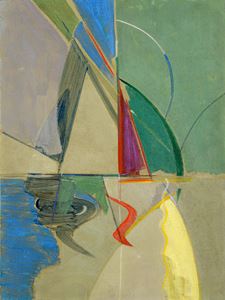 
Relatively few paintings and drawings by Humphrey Jennings are signed, dated or titled by the artist, and only a handful of his works are today in public collections, including the Tate. Like his paintings, Jennings’s drawings display some similarities to the work of the Italian Futurists, and are characterized by a spare, almost Oriental, use of line. As Kathleen Raine recalled, ‘Sometimes he would paint some apparently naively simple, realistic object – like a matchbox; or, approaching the problem from another point of view, only a few brushmarks, of infinite delicacy of touch and subtlety of colour, on canvases largely left bare – so left because every brushmark must be made with meaning, deliberately placed according to a complex imaginative operation, involving both conscious thought and instinctive sensibility…French in visual perception, English in his sense of the poetic image, Chinese in his philosophy of how an action (painting in particular) should be performed, he sought simultaneously for three kinds of truth; in his mature work, so it seems to me, all these are achieved.’This watercolour may be dated to around 1949, and would is a study for a small oil painting on canvas by Jennings, of identical dimensions and dated 1949-50. The finished painting is sold with the drawing.