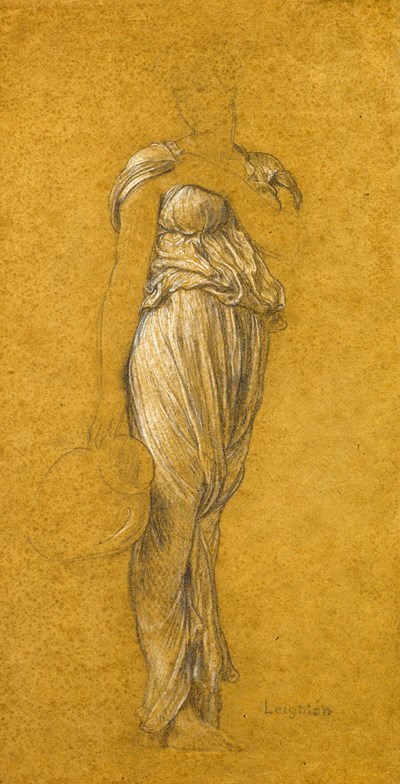 
This large sheet is a study for the drapery of one of the woman drawing water from a well at the right-hand side of Leighton’s large painting of Captive Andromache, today in the collection of the Manchester City Art Galleries. Over four metres in length, the painting was the largest work of the artist’s late period. It was exhibited at the Royal Academy in 1888. Andromache was the loyal wife of the Trojan prince Hector. Following her husband’s death and the fall of Troy, she was taken as a concubine by Neoptolemus, ruler of Epirus. Leighton’s painting depicts the mourning Andromache standing among the women of Epirus, waiting for her turn to draw water from a well. Leighton’s painting of Captive Andromache was purchased by the Manchester Art Gallery in 1899 for the considerable sum of four thousand pounds, raised by public subscription.Leighton had been planning a work of this subject for several years. After the composition of the large painting of Captive Andromache had been determined in the form of drawings and oil sketches, the artist turned to the poses of the individual figures. As was his usual practice, these were studied first as nude figures and then with draperies. Leighton seems to have taken about a year to paint the final work.A large number of preparatory studies for Captive Andromache are known, totaling some sixty drawings. These included drawings for the entire composition and for individual figures, both nude and draped, as well as a compositional oil study with all of the figures nude. Twenty-five preparatory drawings for Captive Andromache, including several drapery studies akin to the present sheet, are today in the collection of the Leighton House Museum in London. A drapery study for the central figure of Andromache, presented by Leighton himself to the Musée du Luxembourg in Paris, is in the Louvre. As Leonée and Richard Ormond have noted of the drawings of the artist’s late period, such as the present sheet, ‘The painstaking technique of Leighton’s early pencil drawings gave way to more tonal effects. Though outline still plays an important part in these later drawings, they are softer and more aesthetic in style, like comparable drawings by Whistler and Albert Moore. Many of them have a studied elegance and finish that seems to belie their status as studies. They were, however, extensively used in the process of picture making. For some of his major compositions, Leighton drew as many as thirty or forty separate studies. They fall into various categories: studies from the nude and draped model; detailed studies of drapery, with the figure left out or sketched in outline; studies of accessories; perspective studies; compositional studies; large outline drawings of the whole design; and finished cartoon-like drawings, sometimes squared-off…The drawings remain languid and beautiful, and, looking at them, one can appreciate why Leighton’s most successful works were his decorative studies of models.’Not long after it was drawn, the present sheet was selected as one of four drapery studies for Captive Andromache used to illustrate an article on ‘Expression in Drapery’ in The Magazine of Art, published in 1889, shortly after the large painting was exhibited at the Royal Academy. Marion Harry Spielmann, the editor of the periodical and a noted Victorian art critic, wrote that ‘We are here permitted to publish reproductions of Sir Frederick Leighton’s original studies of drapery for his picture of “Captive Andromache” in this year’s Royal Academy exhibition. The drawings of no living artist could better illustrate the subject than those of the great English master of drapery.’This particular drawing also appears in a photograph of the interior of Leighton’s Holland Park studio, taken the year before his death, in which it is seen framed and resting on a chair beneath the north window of the studio. The artist seems to have made a practice of selecting and framing a number of his drawings to be displayed in the alcove beneath the studio window.The present sheet was almost certainly among those shown at the Fine Art Society in London in December 1896, part of a large retrospective exhibition of drawings long kept by the artist in his studio and acquired by the gallery after his death.

Provenance:
Among the contents of the artist’s studio at his death, with part of the posthumous studio stamp, with the letters LLC in a circle (Lugt 1741a), stamped at the lower left cornerAcquired with the rest of Leighton’s drawings by The Fine Art Society, London, in 1896.