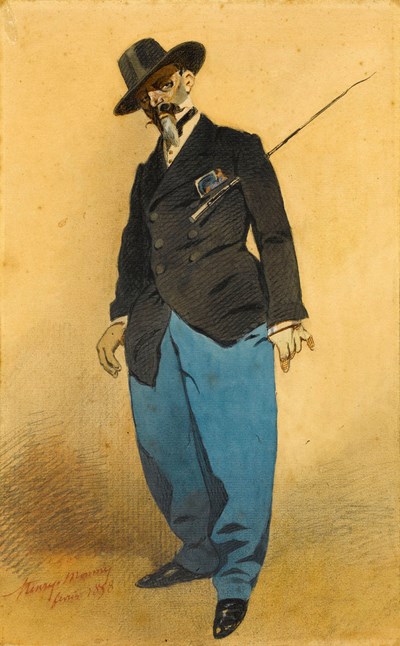 Pen and brown ink and watercolour, over an underdrawing in pencil, on buff paper, laid down. Signed and dated Henry Monnier / fevrier 1858 at the lower left. Traces of a further indistinct inscription in red ink at the lower left. Inscribed Henri Monnier / Delannoy (rôle de Berluber(?) / dans Trioler(?)) on the old backing board.354 x 218 mm. (13 7/8 x 8 5/8 in.)


An amateur thespian himself, Monnier produced several drawings and watercolours of actors in various roles. One of the leading comic actors of his day, Léopold-Émile-Edmond Delannoy (1817-1888) was a popular stage performer at the Théâtre du Vaudeville, where he performed for some thirty-five years, and the Palais-Royal. Another watercolour of Delannoy, dated 1856, was part of the extensive collection of drawings by Monnier, numbering around three hundred sheets, assembled by the art historian Gustave Cahen and dispersed at auction in 1923.

Portrait of the Actor Edmond Delannoy