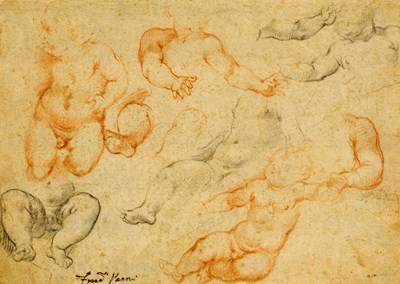 A Sheet of Studies of a Young Child Sold


The present sheet of studies may be related to two altarpieces by Francesco Vanni of the late 1590’s. Both the sketch in black chalk of a child’s legs and lower torso at the lower left and the study in red chalk of an arm and shoulder at the right centre of the sheet are studies for the pose of the Christ Child in Vanni’s altarpiece of The Virgin and Child with Saints Bernardino of Siena, Francis and Leonard in the small Capuchin church on the outskirts of the towns of Arcidosso and Castel del Piano, south of Siena. One of Vanni’s finest altarpieces, the painting is fully signed and dated, and was completed in 1593, around the same time the convent church was built. In the painting, the Christ Child holds an orb, and his legs are partly covered with drapery. The remaining studies on this sheet are related to the figure of the Christ Child in The Madonna and Child with Saints Cecilia and Agnes in the Sienese church of Sant’Agnese a Vignano, datable to between 1595 and 1600. The study of a reclining child in red chalk at the bottom centre of the sheet is very close to the pose of the child in the painting, although in reverse. Just above this sketch is a definitive study in black chalk for the extended leg of the Child, again in reverse. The red chalk study of arms at the top centre and the black chalk studies at the upper right of the sheet are studies for the arms of the Child, which in the painting reach out to place a garland on the head of Saint Cecilia.The inscription Franc.o Vanni at the bottom of the sheet, written in a 17th century hand, is identical to that found on a drawing by Vanni in the collection of the Uffizi in Florence.

A Sheet of Studies of a Young Child