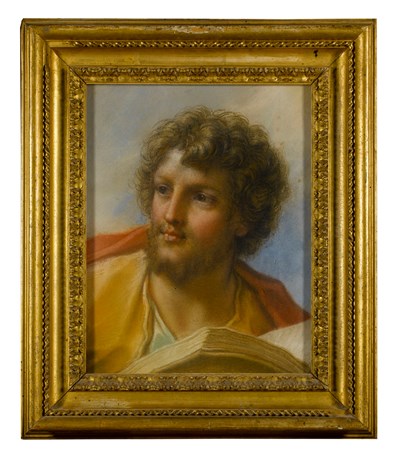 The Head of an Apostle Sold


Luti was particularly noted by his contemporaries for his work as a draughtsman in pastel and coloured chalks. As Peter Bowron has written of the artist, ‘His earliest biographers expressed their admiration for his pastel and coloured chalk drawings, which, for their relatively early date in the Settecento, are characterized by unexpected freshness and brilliance.’ Luti’s interest in the medium of pastel was developed as a student in his native Florence in the 1680’s, where the works in the technique were popular at the Medici court. The earliest known pastel drawings of heads by Luti are dated 1703 and 1704, and the artist continued to produce such works throughout his later career. Luti’s chalk and pastel studies of heads, produced as autonomous works of art, were highly sought-after by collectors and connoisseurs, and account for a small but significant part of the artist’s oeuvre. Bowron has pointed out that ‘Luti produced intermittently throughout his career highly finished drawings and pastels for the trade. These fresh and luminous studies of heads and bust-length figures are historically significant as among the first of their kind to be created and appreciated strictly as independent works of art rather than as preparatory studies for a canvas or fresco...The result was a thriving trade in pastel heads of young children, saints, and angels, and in portraits.’ Among the collectors of these highly finished pastel drawings of heads by Luti were the Gran Principe Ferdinando de’ Medici in Florence and both the Marchese Niccolo Maria Pallavicini and Cardinal Pietro Ottoboni in Rome, as well as such eminent foreign visitors to Rome as Thomas Coke, 1st Earl of Leicester.In superb condition, this is one of a set of twelve pastel heads of apostles by Luti, executed in 1712, which first appeared at auction in 19873, and which have been aptly described as ‘among the most handsome creations of the artist’. The identification of the individual apostles is not possible, however, since Luti has depicted them without their respective attributes. Although it has been suggested that this series of pastels were drawn as studies for heads in finished paintings by the artist, it is more likely that they were intended as autonomous works of art. This is further confirmed by the signature and dating of most of the pastels on the backing boards of their original frames - as seen in the present example – which would further suggest that the works were either framed in Luti’s studio, or under his supervision. This splendid drawing is a particularly fine and fresh example of Luti’s mastery of the pastel medium. The pastel is handled with great skill and a refined technique, with areas of stumping contrasted and complemented with individual chalk strokes of unblended colour. Neil Jeffares has written of this 1712 group of pastel heads of apostles that ‘The subtle coloration of these heads achieves a remarkable sense of volume and luminosity; reds and oranges predominate. Distinctive traces of black chalk – in hair and on clothing – betray the graphic conception behind what are some of the earliest true paintings in pastel.’ While it is likely that this set of twelve pastel heads of apostles was the result of a particular commission, the identity of the patron or original owner of these drawings remains as yet unknown. Certainly, Luti’s position as one of the leading collectors, art dealers and connoisseurs in Rome allowed him an excellent opportunity to market his finished pastel drawings, and the likelihood is that the entire series of twelve heads were intended for one patron or collector, and acquired en bloc. They remained together as a group, in their original 18th century Roman frames, for 275 years before being dispersed at auction in 1987.

The Head of an Apostle