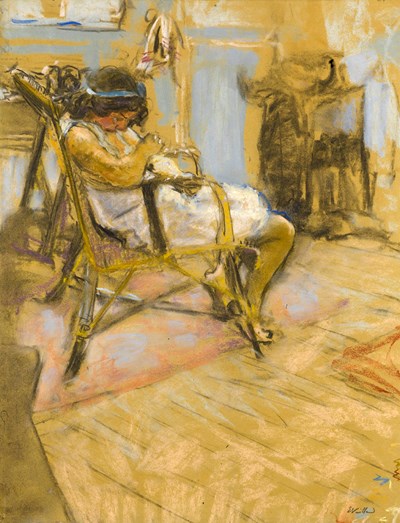 A Young Girl Seated in a Chair in a Studio Sold


Perhaps a first idea for the setting for a painted portrait or interior scene, this large sheet is a fine and vivid example of Vuillard’s mastery of the pastel medium. The interior depicted in this drawing appears to be the artist’s second studio, on the Boulevard Malesherbes in Paris, which he began renting in 1909 and used in addition to his main studio on the Place Vintimille. As Jacques Salomon has noted, ‘For some years Vuillard had been renting a studio at 112 boulevard Malesherbes, using it to paint large canvases in and to store everything that his small apartment could not contain. From time to time, he also received models there. The place comprised a bedroom that got its light on one side from the studio, and on the other from a tiny kitchen...’ The present sheet may be loosely grouped with a series of paintings and pastels of nude or partially-clothed models seated or at rest in the studio, datable between 1909 and 1911.MaryAnne Stevens has suggested of these works that they may reflect Vuillard’s response to his fellow Nabi Pierre Bonnard’s increasing focus on paintings of nudes in interiors. ‘Unlike Bonnard’s nudes, however, which were intended for public exhibition and dominate the domestic settings in which they are portrayed, Vuillard’s remain essentially private studies set resolutely within the context of the creative environment, the artist’s studio. Seated,...in relaxed poses,...or standing, naked or half-dressed...they relate to a larger, ongoing enterprise: a visual investigation of the “life of the studio”.'The physician Prosper-Émile Weil (1873-1963) and his wife Juliette were patrons of Vuillard in the 1920’s. An acquaintance of the artist’s friends Jos and Lucy Hessel, Dr. Weil became the artist’s personal physician in the 1930’s, while Juliette Weil became one of Vuillard’s favourite models and confidants. Vuillard painted a portrait of the Weil children with their mother in 1922-19236 and produced pastel portraits of both Prosper-Emile and Juliette Weil between 1926 and 1928. Apart from these family portraits, the Weils owned several pastels by Vuillard, including landscapes, floral still lives, and a self-portrait.

A Young Girl Seated in a Chair in a Studio