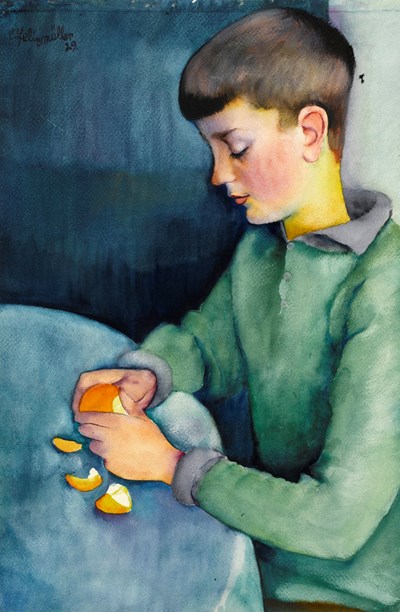 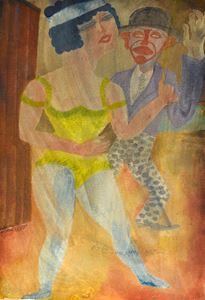 
Drawn the same year that the artist’s manifesto declaring his break with the tenets of Expressionism was published in the periodical Kunst und Künstler, this vibrant drawing is a portrait of Felixmüller’s son Luca, the artist’s eldest child, born in 1918. Luca and his younger brother Titus were to be the painter’s favourite models throughout their childhood, and he produced numerous painted and drawn portraits of them at rest and play. A pendant watercolour of the same size and date, entitled Die Milch and depicting Luca or Titus drinking a glass of milk, is in a private collection.Shortly after Conrad Felixmüller’s death, his son Titus provided an account of the way in which he and his elder brother would pose for their father. As he recalled, ‘for the sons, modeling created a special relationship with their father which lasted past their childhood years and carried over into manhood…Ideas for family portraits or scenes arose spontaneously. Watching one of his children playing, be it with a wooden train, a cat or a paper hat, would end with the categorical demand: “Just keep standing still like that, I will be back with pencil and paper.” We then knew what was in store for us; we had been trapped into being his models again…After a few sketches or sometimes even grand drawings – of which a few still exist – came the fine scratching noise of charcoal on canvas to fix the composition. That often signaled the end of the first day of modeling...A day of modeling lasted two to three hours, interrupted by short breaks which gave the children the opportunity to view the picture and also to criticize it…I draw from these times of being together an understanding for the great work of my father. I am happy about that, even if it meant many “quiet” hours which are not always easy for children.’A closely related painting of the same subject, dated 1929, in which a potted plant is seen on the table, is in a German private collection. Also related in subject is an earlier work of 1925; a painting of Luca seated and drawing at a table on which rests a vase of flowers.The verso of the present sheet, drawn in a bold, Expressionist manner typical of the artist’s work of the early 1920’s, must predate the portrait of Luca on the recto by several years. It is, in fact, closely related to a watercolour of a pair of circus performers, dating from 1921, which is today in a private collection in Germany. Felixmüller produced a handful of drawings of clowns, acrobats, tightrope walkers and other circus folk in the first half of the 1920’s. The artist must have decided to use the reverse of an old drawing when he came to make the portrait of his son several years later.Dated 1929, this watercolour portrait of Luca, which the artist kept throughout his life and which has remained in the possession of his family until recently, gains added poignancy in its depiction of the happiness and tranquility of the artist’s family life in the years before the Nazi rise to power and the subsequent upheavals in the artist’s life and career.

Provenance:
The Felixmüller estateThence by descent in the family of the artist until 2010.