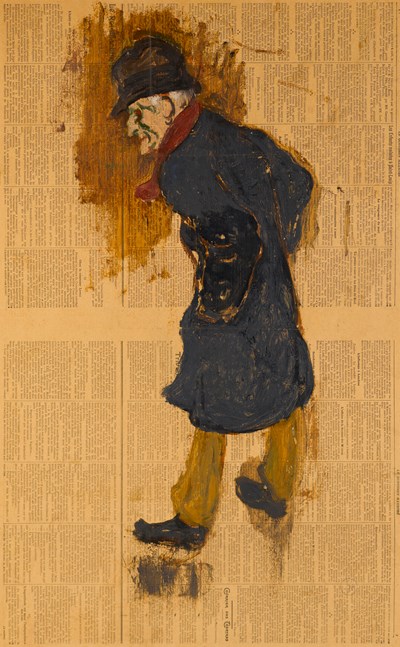 
Henri Evenepoel was fascinated by the life and people of Paris, and produced several paintings of crowded Parisian street scenes, figure types and genre subjects, in which the influence of artists like Henri de Toulouse-Lautrec and Jean-Louis Forain is readily evident. As he wrote in 1897 to his close friend Charles Didisheim, ‘People are for me blacks and greys or reds or greens against the background of a hazy city or in the chiaroscuro of a room...’ Always interested in the life of the Parisian streets, Evenepoel’s sympathetic attitude towards the working classes is seen in the comments he made to his father about a monumental painting of Labourers Returning from Work, completed in 1896 and today in the Musée Royal des Beaux-Arts in Antwerp: ‘I saw this at the Invalides and was tempted to do it. Still covered with dust and mud, they are returning in groups through the immense Esplanade and stride along toward their homes. With their ample trousers, their rough faces wrinkled by constant work, they are truly impressive.’The present sheet belonged to Evenepoel’s cousin Louise van Mattemburgh (1869-1941), with whom the artist first lived when he arrived in Paris to study at the Ecole des Beaux-Arts. He soon fell deeply in love with Louise who, in November 1894, gave birth to a son by him, named Charles. Evenepoel had planned to marry Louise before his sudden death from typhoid in 1899.