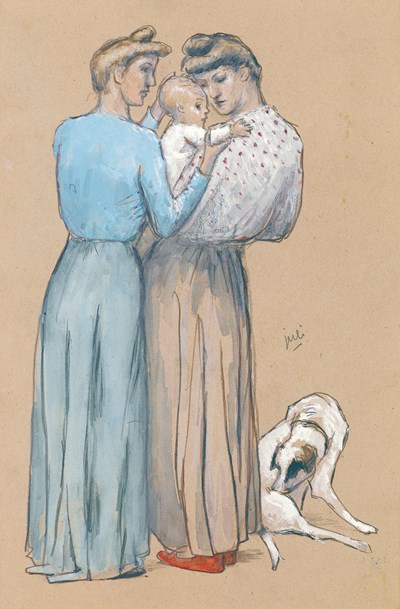 Women and Child with a Dog (Maternité au chien)


This sheet may be associated with a series of watercolour drawings of mothers and children, usually titled Maternité, which the artist produced between around 1904 and 1914, although the earliest dated examples were drawn in 1906. These figures, often depicted in poor urban or rural landscapes, are imbued with a distinct melancholy, and are, as has been noted, somewhat reminiscent of the figures in the Blue Period paintings of Picasso. As Llorens has described these drawings: ‘Although other figures occasionally appear, the dominant figure is that of a mother with a child in her arms, standing out as a static, weightless form against a landscape of houses on the outskirts of a town, or sometimes against a flat background.’ Another scholar, Josette Gibert, notes of these early Maternités that, ‘They are so rarely evocative of joy, of serenity. Humble women, with sad faces, hold in their arms a child which, very often, they are not looking at. Poor country or suburban houses, surrounded by trees stripped of their leaves, this is the landscape that provides a setting for these scenes.’ González returned to the theme of the standing mother and child around 1925, working in his more schematic manner of drawing of this period, and he continued to treat the theme in his drawings until his death. These later drawings are, however, more obviously those of a sculptor.In his catalogue raisonné of the artist’s early drawings, Tomàs Llorens has grouped the present sheet with one painting and sixteen other drawings by González, several of which are dated 1906. As he writes of this group, ‘González abandons the type of the mother with a child in her arms. The subjects now are varied scenes with mothers and children, treated with a more descriptive, anecdotal view and in a less formalized naturalistic style than the group of early 1906.’

Women and Child with a Dog (Maternité au chien)