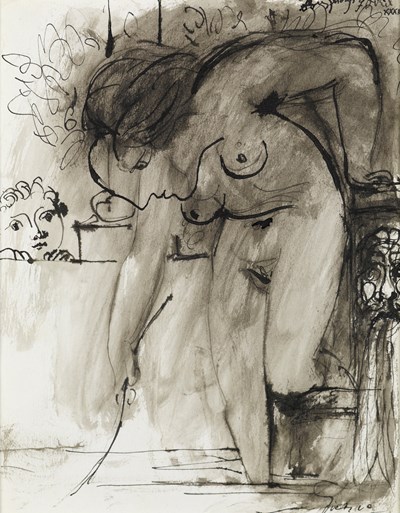 
Drawn on the 9th of April 1933, this superb pen and wash drawing remained unknown to Christian Zervos and most Picasso scholars, and is previously unpublished. The drawing depicts Picasso’s young lover Marie-Thérèse Walter, and was drawn at the Château de Boisgeloup, a country house near Gisors, seventy kilometres northwest of Paris, which Picasso had bought in 1930. While his wife Olga would be in residence at Boisgeloup during the weekends, she would usually spend her weekdays in Paris, and it was then that Marie-Thérèse Walter would come and stay. As the artist’s granddaughter has recently written, ‘Boisgeloup represented the haven of peace that he had been looking for, where he could live in secret with Marie-Thérèse...it was the only place where Picasso and Marie-Thérèse could meet in peace without the risk of being discovered at any time.’ Marie-Thérèse Walter had met Picasso in Paris in January 1927, and her relationship with the artist was to greatly inspire him. At Boisgeloup, Marie-Thérèse would pose for numerous paintings, drawings and sculptures, and this period was to be among the most fruitful and creative of Picasso’s long career. In this drawing, Marie-Thérèse is easily recognizable as the bather, who is secretly observed by a young boy as she steps into a bath or pool. The artist may here have been basing his composition on the Biblical theme of ‘Susanna and the Elders’, a common subject of Old Master paintings, although the old men of the Old Testament tale have here been replaced by a curious youth, peering timidly over the edge of the bath. The theme of voyeurism is, of course, one that Picasso would return to throughout his later career. A closely related drawing in pen and ink wash, of horizontal format, was drawn at Boisgeloup two days after the present sheet and is today in the Graphische Sammlung of the Staatsgalerie in Stuttgart. The Stuttgart drawing depicts the bather spied on by two young boys, not one. Another related pen and ink drawing, also horizontal in orientation and dated the day after the present sheet, appeared at auction in New York in 1990. A related subject of Startled Bathers (Les Baigneuses surprises) is found in one of Picasso’s etchings for the Vollard Suite, dated 22 May 1933.