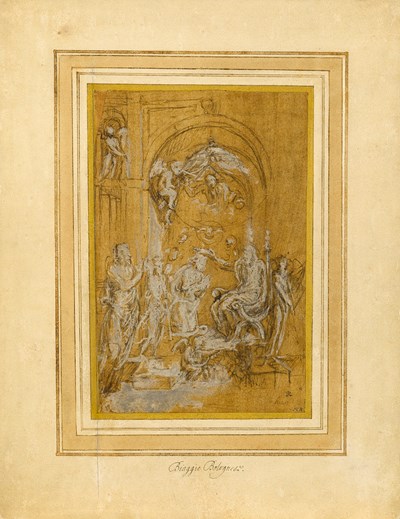 The Coronation of the Virgin with Saint John the Baptist, God the Father Above


The abbreviated technique of this sheet is characteristic of Pupini’s distinctive draughtsmanship. An altarpiece by Pupini of a similar subject was painted for the Pulzoni chapel in the Bolognese church of San Giuliano around 1545, but it is quite different in composition.One of the leading collectors of drawings in Italy in the 17th century, the Oratorian priest Padre Sebastiano Resta (1635-1714) assembled a large and significant group of some 3,500 sheets, gathered into about thirty albums. At least nineteen of these albums, containing almost 2,500 drawings, were compiled by Resta for his patron and fellow collector Monsignor Giovanni Matteo Marchetti (1647-1704), Bishop of Arezzo from 1691 until his death. After Marchetti’s death in 1704, the Resta albums were offered for sale by his heirs. They were eventually acquired in 1710 by John, Lord Somers (1651-1716), Lord Chancellor of England. The Resta albums were in England by 1711, but Somers soon decided to break up the albums and have the drawings remounted. Before doing so, however, he had fourteen original Resta volumes lettered from A to O, with each drawing within them numbered consecutively, together with the album letter, on the recto. (On the present sheet, this so-called Resta-Somers number is the k.213 inscribed near the lower right corner.) A manuscript inventory of the Resta-Somers albums, transcribing Resta’s own notes on each of the drawings, is today in the British Library. The entry for the present sheet, listed under no. K.213, reads: ‘Mo. Biagio Puppini Bolognese, Discepolo / del Francia, prattirò con l’Imola e Gerolimino / da Carpi. fugossotto(?).’ The year after Somers’ death in 1716, his drawings were sold at auction in London and dispersed. This drawing then entered the collection of the English portrait painter, author and connoisseur Jonathan Richardson, Senior (1667-1745), whose collector’s mark is found at the lower right corner of the sheet. Richardson owned a remarkable collection of nearly five thousand drawings, mostly Italian works of the 16th and 17th centuries, assembled over a period of about fifty years. Richardson’s extensive collection was organized by school and date, and the drawings were further classified with a complex system of shelfmarks, examples of which can be found inscribed by Richardson on the reverse of the mount of this drawing.The present sheet also bears the collector’s mark of Sir J. C. Robinson (1824-1913), a scholar and curator who was a leading figure in the Victorian art world, serving as director of the South Kensington Museum (later the Victoria and Albert Museum) in London.

Provenance:
Padre Sebastiano Resta, RomePresented by him, as part of an album of drawings, to Monsignor Giovanni Matteo Marchetti, Arezzo, in 1698By descent to his nephew, Cavaliere Orazio Marchetti da PistoiaSold in 1710 with the Resta collection of drawings, probably through John Talman, to John, Lord Somers, London (Lugt 2981)Probably his sale, London, Peter Motteaux, 16 May 1717Jonathan Richardson, Senior, London (Lugt 2184), with his shelfmarks and on his mount with his transcription of Resta’s annotationsProbably his sale, London, Christopher Cock, 22 January to 8 February 1747Sir John Charles Robinson, London and Swanage (Lugt 1433)Possibly Dr. Carl Robert Rudolf, London (according to a photograph mount in the Witt Library)Hugh and April Squire, London and WoodbridgeTheir anonymous sale, London, Sotheby’s, 4 July 1975, lot 54Ralph Holland, NewcastleThence by descent until 2013.

Literature:
Anon., Father Resta’s Remarks on the Drawings, British Library MS Lansdowne 802, undated, p.192v, no.213; Anon., An Alphabetical Catalogue of the Painters in the Collection, with the Drawings of each respective Master, referring to the several Books in which they are placed, British Library MS Lansdowne 803, undated, p.52v (‘Puppini Bolognese (Biagio) 1471 / Coronation of the Blessed Virgin. J 49.’); Ralph Holland, Italian Drawings 1525-1750, exhibition catalogue, Newcastle, 1982, p.1, no.4.

The Coronation of the Virgin with Saint John the Baptist, God the Father Above