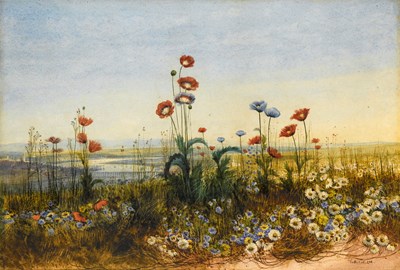 Watercolour, with pen and brown ink and brown wash, over an underdrawing in pencil. Signed A. Nicholl. RHA. at the lower right.366 x 534 mm. (14 3/8 x 21 in.)ACQUIRED BY THE ART GALLERY OF NEW SOUTH WALES, SYDNEY, AUSTRALIA.


Andrew Nicholl developed a speciality of views of coastal towns in Ireland - Fairhead, Howth, Ramelton, Dunluce Castle, Bray, Carlingford and elsewhere - seen through a bank of wild flowers; a combination of the genres of landscape and botanical still life. The present sheet is a particularly fine and large example of this distinctive genre. The view of Derry in the distance at the left is dominated by the Georgian bridge across the river Foyle, built by the 4th Earl of Bristol in 1790. Nicholl has also depicted a variety of shipping in the river, marking Derry’s importance as one of the main ports of embarkation for Irish emigrants to North America in the 19th century. Although Nicholl rarely dated his work, this large watercolour may probably be dated to the 1830’s1. A watercolour of this type ‘represents a fresh quality in the observance of nature...[the artist] often utilized wild flowers painted in the foreground to form a screen through which we dimly perceive a landscape. It is as if we are lying on our stomachs, like hares, watching as the world marches by. The paintings have a sharpness of vision and naïveté that is entirely captivating.’Among comparable watercolours is A Bank of Flowers, with a View of Bray and the Valley of the Dargle, Co. Wicklow, in the Ulster Museum and Wildflowers with Downhill, Co. Derry, formerly in the collection of Bruce Chatwin, while other examples are in the National Gallery of Ireland in Dublin. As such works have been described by Anne Crookshank and the Knight of Glin, these ‘near-surrealist watercolours of wild flowers, poppies and daisies, with land and seascapes in the background...[have] an originality which makes them among the most haunting...Irish paintings of the early nineteenth century. These are his masterpieces.’

A Distant View of Derry Through a Bank of Wild Flowers