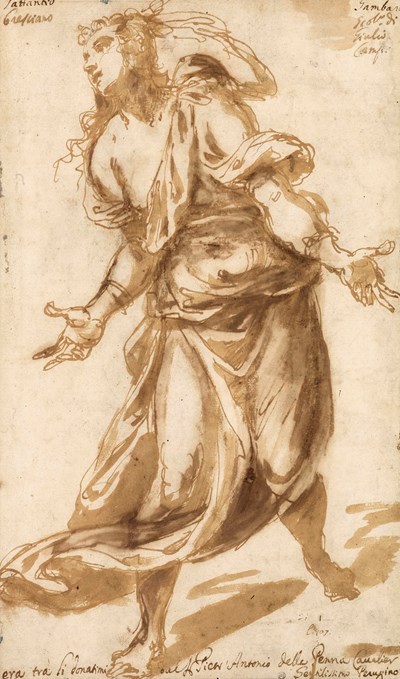 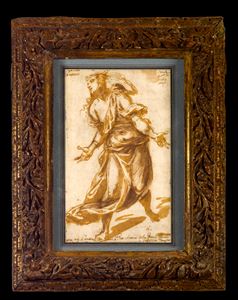 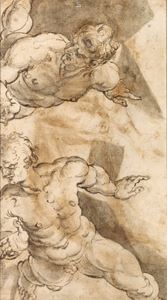 
Neither side of this drawing may be definitively related to any surviving painting or fresco by Maffei. Nevertheless, the female figure on the recto of the sheet is of a type that appears in a number of works by the artist, such as the very large painting of The Glorification of Giovanni Cavalli of 1646 in the church of La Rotonda in Rovigo or the equally grand Glorification of the Podestà Alvise Foscarini painted in 1655 for the Palazzo del Podestà in Vicenza and today in the Museo Civico there. Perhaps the closest comparisons, however, are a series of mythological and allegorical female figures frescoed by Maffei between 1647 and 1648 for the Sala dell’Odeo of the Teatro Olimpico in Vicenza. The frescoes, which are today in a poor state of preservation, share a theatricality of both costume and gesture with the figure in the present sheet.Also very close in pose and type to the female figure on present sheet is the figure of Hagar in a painting by Francesco Maffei of Hagar and the Angel of c.1657, recently acquired by the Metropolitan Museum of Art, New York. Also close to the present sheet is the figure of Hagar, facing to the left, in another, smaller painting of the same subject by Maffei, which appeared at auction in London in 1997.While the studies of falling male nudes on the verso of the sheet also cannot be linked with any surviving work by Maffei, closely comparable muscular male figures appear in the artist’s massive canvas of The Fall of the Rebel Angels, painted in 1656 for the church of San Michele in Vicenza and today in the Seminario Arcivescovile in the town of Venegono Inferiore in Lombardy. Indeed, the figures on the verso of this drawing may well be tentatively regarded as preliminary studies for the 1656 canvas, although similar nudes are also found among the drowning soldiers in Maffei’s canvas of The Passage of the Red Sea in the Vicentine convent of Santa Lucia, also datable to the 1650’s. Stylistic comparisons may be made in particular with a group of drawings of similar male nudes by the artist, which are today in the collections of the Louvre, the Albertina in Vienna and the Istituto Nazionale per la Grafica in Rome, as well as a double-sided sheet formerly in the collection of Edmund Pillsbury and sold at auction in 2005 and 2009. All four drawings were once attributed to Jacopo Tintoretto, and have been dated to the early part of Maffei’s career, before about 1640. Another stylistically related drawing by Maffei was acquired by the Ashmolean Museum in Oxford in 2002.