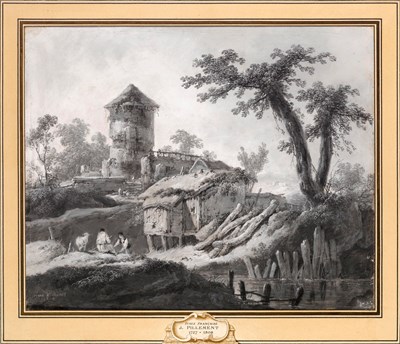 
Landscapes such as this are typical of Pillement’s approach to the depiction of nature, filtered through his study of such Dutch masters as Jan Both, Aelbert Cuyp and Nicolaes Berchem. As Maria Gordon-Smith has noted of Pillement, ‘His figures of shepherdesses, herdsmen, fishermen and washerwomen seem to rest happily or go about their innocent daily tasks in the company of their friendly cows, sheep, goats, donkeys, dogs, etc., all of which are equally as important as the masters who guard them. Nature is usually benevolent...The total effect is an inviting Arcadian stage.’It may also be noted in passing that, in keeping with many of the artist’s river landscapes, the present composition depicts a number of wooden stakes or pilings (pillements in French) set into the water’s edge; it has been suggested that this may have been intended as a sort of whimsical signature on the part of the artist.This finished grisaille landscape – signed in full and dated 1804, and undoubtedly intended as an autonomous work of art - was drawn when the artist was living and working in his native Lyon, near the end of his long career.

Provenance:
With Georges Meyer, Paris [dealer], his label on the back of the frame.

River Landscape with a Ruined Tower