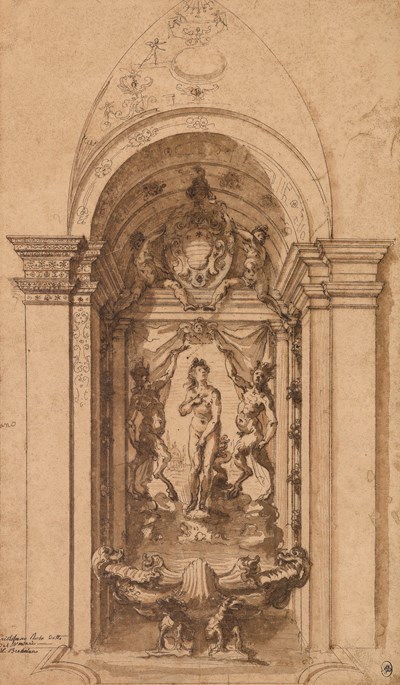 A Design for a Wall Decoration or Fountain, with a Nymph (Venus?) Flanked by Satyrs Sold


This large and impressive drawing is unrelated to any surviving work by Cherubino Alberti. The coat of arms at the top of the sheet, which would presumably be those of the patron, incorporates stars similar to those found on the arms of the noble Aldobrandini family, for whom Cherubino worked extensively. The helmet at the top of the coat of arms would seem to identify the patron as a cavaliere, or knight. Among stylistically and thematically comparable drawings by Cherubino Alberti is a design for the wall decoration of the Farnese Gallery of the Palazzo Farnese in Rome, in the Kupferstichkabinett in Berlin, and a project for the decoration of a loggia, in the Museo di Capodimonte in Naples. Both drawings share a similar handing of pen and wash with the present sheet, and incorporate analogous figures flanking coats of arms.The satyrs in this drawing are also stylistically very similar to those in a pen study of Two Satyrs, formerly part of the collection assembled by Don Gaspar Mendéz de Haro y Guzman, Marqués del Carpio, while serving as Viceroy of Naples in the 1680’s, and more recently in the collection of the late Alfred Moir of Santa Barbara, California. Although the Moir drawing bears an old attribution to the Cavaliere d’Arpino, and has indeed been published as an early work by that artist by Herwarth Röttgen, it has recently been removed from the corpus of Arpino’s drawings by Marco Bolzoni, who has suggested instead a tentative attribution to Cherubino or Giovanni Alberti.The inscription at the lower left of the sheet refers to the obscure Brescian artist Cristofano Rosa (d.1576), of whom Vasari writes, ‘The brothers Cristofano and Stefano, painters of Brescia, have a great name among craftsmen for their facility in drawing in perspective.’ The present sheet would, however, appear to be later in date.

A Design for a Wall Decoration or Fountain, with a Nymph (Venus?) Flanked by Satyrs