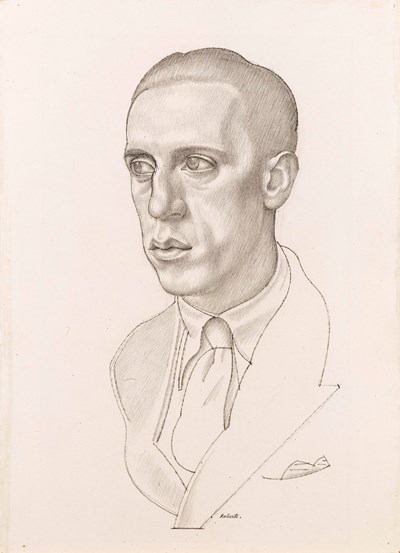 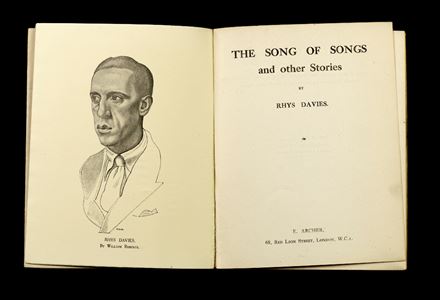 
Drawn in 1926, this is a portrait of the Welsh writer and novelist Rhys Davies. The drawing was used to accompany a story by Davies, entitled ‘Aaron’, which appeared in the sixth and final issue of the literary magazine The New Coterie, published in London in 1927. The magazine, which first appeared in the spring of 1926, published several of Davies’s stories. Roberts also designed the cover for the short-lived magazine, which folded after only six issues. This drawing also served as the frontispiece to Davies’s The Song of Songs and other Stories, privately published in London in 1927, which included some stories previously printed in The New Coterie.Born in the village of Clydach Vale in South Wales, Rhys Davies (1901-1978) first took up writing in his early twenties. His first short stories were published in The New Coterie in 1926, and his first novel, The Withered Root, appeared a year later. Shortly after this drawing was made, Davies and Roberts travelled together to Germany, together with Charles Lahr, the publisher of The New Coterie, and another contributor to the magazine, H. E. Bates, of whom Roberts had also produced a portrait drawing. Rhys Davies’s published output was prodigious, and included eighteen novels, over a hundred short stories - some of which appeared in The New Yorker - as well as several articles and essays. He was awarded an O.B.E. in 1968, and published the first part of an autobiography, entitled Print of a Hare’s Foot, the following year.A pair of related portrait drawings by William Roberts, depicting the authors Herbert Ernest Bates (1905-1974) and Theodore Francis Powys (1875-1953) - with the same provenance as the present sheet and similarly used as illustrations for the magazine The New Coterie - have recently been acquired by the National Portrait Gallery in London.This drawing was probably acquired from the artist by his friend Charles Lahr (1855-1971), the owner of the Progressive Bookshop in London and publisher of The New Coterie. It later entered the collection of Wyndham T. Vint, of Bradford in Yorkshire, who assembled a large and varied group of paintings and drawings by British artists of the 19th and 20th centuries. An exhibition of two hundred drawings and watercolours from Vint’s collection, including the present sheet, was held at the Public Art Galleries in Brighton in 1937.