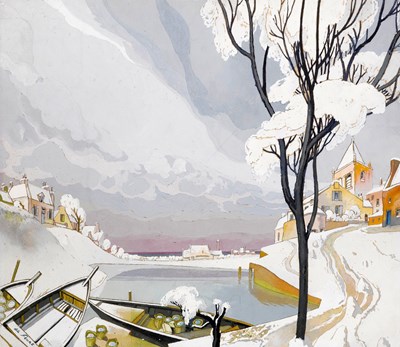 
The major exhibition of Georges de Feure’s work held in 1903 at Siegfried Bing’s Galerie de l’Art Nouveau in Paris, and later that year in The Hague, included 155 paintings, watercolours and prints, most of which had been produced during the previous three or four years. Among the revelations of this exhibition, for critics and collectors alike, were a group of over fifty landscape paintings and drawings, a previously little-known aspect of the artist’s oeuvre. The landscapes exhibited included forest and woodland scenes near Fontainebleau, where the artist had a home. These works dominated the exhibition, and drew the attention of several writers. As one critic noted at the time of the 1903 exhibition, de Feure ‘has applied the marvellous technique of the Japanese to European landscape, and has created a new style. The tones are worked in watercolors. Whatman and Bristol paper become the palette of the artist, and on them he mixes, dilutes, shades off, and works his colors, here leaving a spot clear white, there laying on thickly with gouache. In brief, he paints water-colors with the methods of oil.’ From this time onwards the artist chose to exhibit landscapes almost exclusively, including a number of forest and woodland scenes inspired by the countryside around Bois-le-Roi, near Fontainebleau, where the artist had a home.Gouache landscapes such as this find their origins in such earlier works by de Feure as the gouache The Gust of Wind, Holland of c.1900-1903, in a French private collection, in which the landscape elements play a more significant role in what is still essentially an Art Nouveau composition.