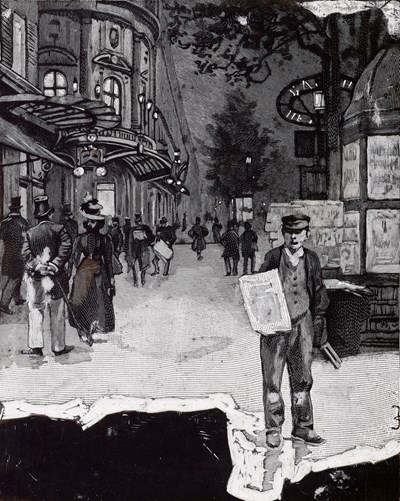 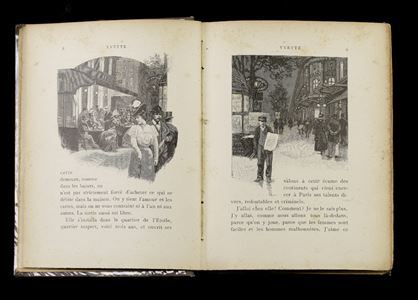 A Parisian Boulevard at Night, with a Newspaper Vendor Sold


This engraved wood block was used for an illustrated edition of Guy de Maupassant’s 'Yvette', a collection of short stories published in Paris in 1902, with illustrations by Cortazzo engraved by G. Lemoine. Maupassant’s story 'Yvette' was first published in Le Figaro of August-September 1884, and was reprinted as a book the following year. Cortazzo’s image was used to illustrate the beginning of the story, which sets the scene as the two friends Jean de Servigny and Léon Saval leave the Café Riche and walk along the streets of Paris:‘A restless crowd was moving along the boulevard, that throng peculiar to summer nights, drinking, chatting, and flowing like a river, filled with a sense of comfort and joy. Here and there a cafe threw a flood of light upon a knot of patrons drinking at little tables on the sidewalk, which were covered with bottles and glasses, hindering the passing of the hurrying multitude. On the pavement the cabs with their red, blue, or green lights dashed by, showing for a second, in the glimmer, the thin shadow of the horse, the raised profile of the coachman, and the dark box of the carriage.’

A Parisian Boulevard at Night, with a Newspaper Vendor