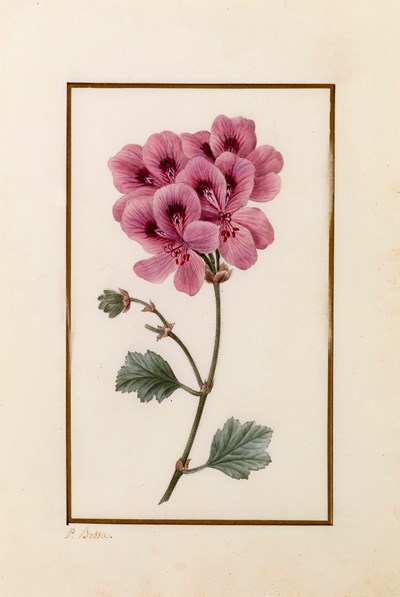 
Pancrace Bessa’s original watercolours for the Herbier général de l’amateur remained together for over 120 years. In 1826 the entire series of drawings on vellum was given by King Charles X (1757-1836) to his daughter-in-law, the Duchesse de Berri, born Princess Caroline of Naples and Sicily (1798-1870). They in turn passed to her sister, Princess Teresa Cristina of the Two Sicilies (1822-1889), wife and consort of the Emperor of Brazil, Dom Pedro II. Around 1890, the watercolours were given by Dom Pedro to the newly appointed director of the Botanic Garden of Rio de Janeiro, the botanist João Barbosa Rodrigues (1842-1909). They eventually passed to Paulo de Campos-Porto (1889-1968), the grandson (by marriage) of Barbosa Rodrigues and also at one time the director of Botanic Garden in Rio, where the drawings were exhibited in the summer of 1946. Bessa’s watercolours for the Herbier général de l’amateur were also shown as a group in exhibitions held in Boston, San Francisco and New York between 1946 and 1947, before finally being dispersed at auction in Los Angeles in November 1947. Forty-six watercolours by Bessa for the Herbier général de l’amateur are today in the Muséum national d’Histoire naturelle in Paris. Other drawings on vellum by Bessa for the Herbier général, with the same provenance as the present sheet, are in the collections of the Morgan Library and Museum in New York, the Hunt Institute for Botanical Documentation at Carnegie Mellon University in Pittsburgh, the Broughton Collection at the Fitzwilliam Museum in Cambridge, the Royal Horticultural Society in London, and elsewhere.Also known as the Duchess of Gloucester’s geranium, the Pelargonium solubile was given its name by the 19th century English botanist Robert Sweet, who noticed that water dissolves the colour of the plant’s pale pink flowers. As Sweet wrote, ‘This beautiful plant is known in many of our collections by the title of the Duchess of Gloucester's Geranium: we have named it from the curious circumstance of water dissolving the colour of its petals, a circumstance which we first observed in a plant which had been watered over the flowers in the greenhouse, and have often noticed it since, in plants out of doors, after a shower of rain, or watering over head: we have likewise noticed the same effect in some other kinds of nearly the same colours, but in a less degree...it is a robust and free-growing plant, continues in flower a great part of the year, and will thrive in any tolerably good soil.’3 The description of this plant in the Herbier général de l’amateur is taken largely from the first volume of Sweet’s Geraniaceae, published in London two years earlier.