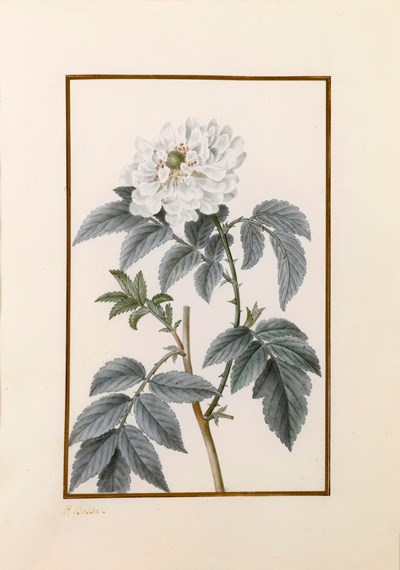 
Pancrace Bessa’s most important commission was for a series of 572 watercolours on vellum for Jean-Claude-Michel Mordant de Launay’s Herbier général de l’amateur, commissioned by Charles X, King of France, and the most significant French flower periodical of the day. Published in eight volumes, the project was begun in 1816 and the artist worked on the series until 1827. Bessa’s beautiful watercolours were superbly reproduced for the book, in the form of hand-coloured engravings by various printmakers. Bessa’s original watercolours for the Herbier général de l’amateur remained together for over 120 years. In 1826 the entire series of drawings on vellum was given by Charles X (1757-1836) to his daughter-in-law, the Duchesse de Berri, born Princess Caroline of Naples and Sicily (1798-1870). They in turn passed to her sister, Princess Teresa Cristina of the Two Sicilies (1822-1889), wife and consort of the Emperor of Brazil, Dom Pedro II. Around 1890, the watercolours were given by Dom Pedro to the botanist João Barbosa Rodrigues (1842-1909), the newly appointed director of the Botanic Garden of Rio de Janeiro. They eventually passed to Paulo de Campos-Porto (1889-1968), the grandson (by marriage) of Barbosa Rodrigues and also at one time the director of Botanic Garden in Rio, where the drawings were exhibited in the summer of 1946. Bessa’s watercolours for the Herbier général de l’amateur were also shown as a group in exhibitions held in Boston, San Francisco and New York between 1946 and 1947, before finally being dispersed at auction in Los Angeles in November 1947. Forty-six watercolours by Bessa for the Herbier général de l’amateur are today in the Muséum national d’Histoire naturelle in Paris. Other drawings on vellum for the Herbier général, with the same provenance as the present sheet, are in the collections of the Morgan Library and Museum in New York, the Hunt Institute for Botanical Documentation at Carnegie Mellon University in Pittsburgh, the Broughton Collection at the Fitzwilliam Museum in Cambridge, the Royal Horticultural Society in London, and elsewhere.Only rarely cultivated, the Roseleaf bramble (Rubus Rosifolius) is a tropical plant with a white flower and edible fruit. It is found abundantly in the Brazilian rainforest and also in the Himalayas, East Asia and Australia.