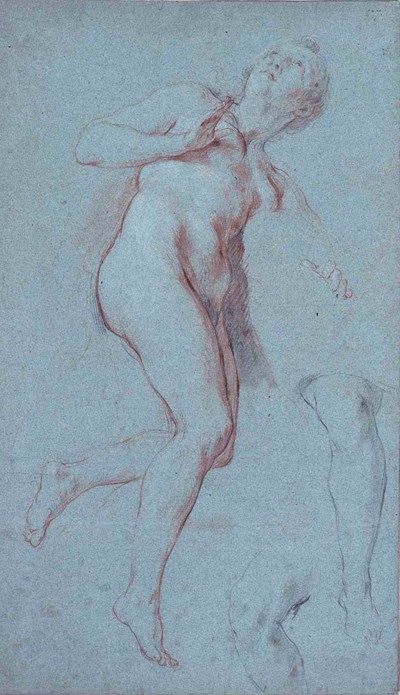 Study of a Female Nude, with Two Separate Studies of a Leg Sold


A splendid example of Lemoyne’s draughtsmanship, this drawing is a preparatory study for the allegorical figure of Truth in Lemoyne’s large canvas of 'Time Saving Truth from Falsehood and Envy', painted at the very end of his career – between 1735 and 1737 - and today in the Wallace Collection in London. The painting was, in fact, completed the day before the artist’s suicide, as noted by his biographer, the Comte de Caylus; ‘The day before his death, he finished a painting begun long before which depicted Time uncovering Truth. I have never forgotten the kindness with which he showed me the picture after having added the last brushstrokes in front of me to the foreground. There is certainly no sense of his alienation of spirit in the work; it is even one of his most beautiful cabinet pictures.’ The painting depicts the female figure of Truth carried by her father Time, who with his scythe repels the masked figure of Falsehood, while Envy crouches fearfully in the background.

The figure of Truth, for which this drawing is a study, is one of the artist’s loveliest figures, and highlights Lemoyne’s influence on the sensual nudes of his pupils Natoire and Boucher. At the same time, as Bordeaux has noted, ‘The figure of Truth may stand for a restored ideal of bodily perfection and beauty which was more in line with an earlier French version of Bolognese classicism traceable from Simon Vouet to Antoine Coypel.’ The painting had been commissioned (and had in fact already been paid for) by Lemoyne’s chief patron, the financier François Berger. Berger claimed the picture from the artist’s studio shortly after his death, and it joined other paintings by the artist in the collector’s home in Paris, where one room was hung entirely with works by Lemoyne. The painting was later engraved, in reverse, by Lemoyne’s onetime pupil Laurent Cars; the print shows the original dimensions of the canvas, before it was extended on all four sides later in the 18th century. The combination of red and black chalk is a technique that Lemoyne used relatively sparingly in his later career.

The present sheet may be compared to a stylistically similar study of a female nude in 'trois crayons' in the British Museum, which is a preparatory study by Lemoyne for another Berger picture, the 'Hercules and Omphale' of 1724, today in the Louvre. Only one other preparatory drawing by Lemoyne related to the Wallace Collection 'Time Saving Truth from Falsehood and Envy' may be identified. A study for the bearded head of Time, drawn in black chalk on blue paper and with a counterproof on the same sheet, is in the Louvre.

Study of a Female Nude, with Two Separate Studies of a Leg