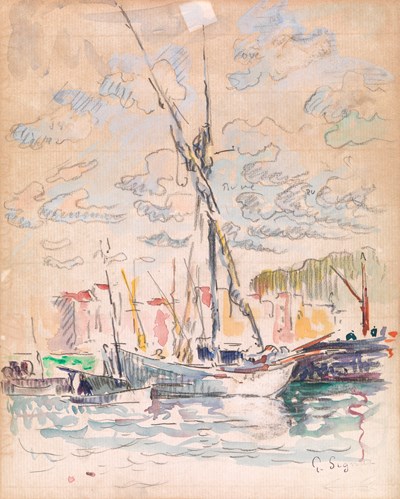 Boats in the Harbour of Saint-Tropez Sold


As one scholar has noted, ‘Signac’s earliest watercolors indicate that he quickly showed an amazing aptitude for the medium and was immediately capable of exploiting its possibilities…Signac had found a new means of expression, which he was able to take to a high level of perfection and which was to occupy a major place in his work. He began systematically to exhibit his watercolors alongside his oil paintings and his drawings; indeed he often insisted that his works on paper be shown alongside his paintings on canvas.’In 1892 Paul Signac sailed his yacht Olympia into the little fishing port of Saint-Tropez, and promptly decided to live there. As he wrote to his mother in October 1892, ‘I am settled here since yesterday and overjoyed...the golden coast of the gulf, the blue seas breaking on a beach, my beach...In the background the blue silhouettes of the Maures and the Esterel – there is enough material to work on for the rest of my days. Happiness – that is what I have just discovered.’ From 1892 onwards Signac lived part of each year at Saint-Tropez, spending his time working and sailing. From this point onwards he stopped painting Parisian scenes and concentrated his attentions on the views in and round this Provençal port.Signac’s interest in such harbour scenes as this was later to be firmly established in the form of a major series of finished watercolours. Between 1929 and 1931 he worked on a project that he had long been considering; a series of watercolours depicting the ports and harbours of France. As Marina Ferretti Bocquillon has noted, ‘Signac had in mind a journey that would take him to one hundred harbors in France with the objective of painting two watercolors of each site. He would let [Gaston] Lévy, who commissioned the project, choose the one he liked best and keep the other for himself...The watercolors...attest to the artist’s vital energy and his delight at being able to devote himself unreservedly to his favorite subjects: harbors, the sea and boats...the tireless traveller conveyed the variety of the skies, the riggings, and the harbor equipment with obvious relish. There is not a trace of nostalgia in these brilliantly fresh and energetic sheets.’ This watercolour was part of a group of six views of Saint-Tropez sold together at auction in 1978.

Boats in the Harbour of Saint-Tropez