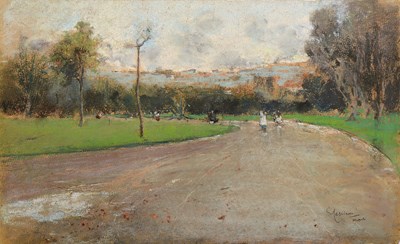 The Park of Capodimonte in Naples


The Royal Park of Capodimonte, situated on a hill above Naples, is dominated by the Palace of Capodimonte, built in 1738 as the summer residence of the Kings of the Two Sicilies. The surrounding park belonged to the Bourbon Kings and was used for hunting, fishing and riding. As a 19th century guidebook noted, ‘Capo di Monte is a delightful hill, commanding a view of a large part of Naples...Round the palace is the park, or royal chase called Bosco di Capo di Monte. It is surrounded with walls, and has an extent of nearly three miles. A little beyond the entrance, five long and wide walks are seen, which advance into the interior of the forest, where they are crossed by other alleys from the opposite side...Statues, fountains, and cottages may be observed along each walk. At the end of the park there is a beautiful cabinet with a parterre, and a fish pound. This is intended to serve as a shelter in case of rain during the chase, which is rendered extremely pleasant by the quantity of hares, rabbits and game of every kind.’

The Park of Capodimonte in Naples