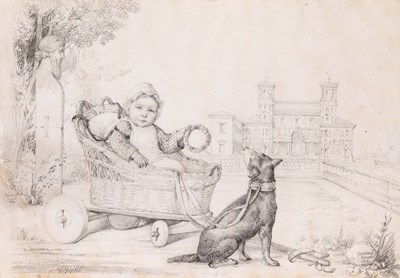 A Portrait of Charlotte-Madeleine Taurel as a Baby, in the Gardens of the Villa Medici in Rome Sold


Like his paintings, drawings by Amable-Paul Coutan are very rare. Among the handful that are known are two watercolour drawings of Italian peasant genre scenes, drawn in Rome and dated 1821 and 1822, in the collection of the Musée Vivenel in Compiègne. The young sitter of this portrait drawing, Charlotte-Madeleine Taurel, was born in Rome in 1820, and was named after her godmother, the wife of the painter Jean-Auguste-Dominique Ingres. She is depicted here in the grounds of the Villa Medici, the French Academy in Rome, accompanied by the family dog Trim, with the cupola of Saint Peter’s in the distance. Charlotte-Madeleine’s parents were the French engraver André-Benoit Taurel and Henriette Thévenin, the adopted daughter of the director of the Académie de France in Rome, Charles Thévenin. The couple were married in June 1819 and Charlotte-Madeleine was born in the Villa Medici in October of the following year. The Taurel family remained in Rome until 1823, when they returned to France. They eventually settled in Amsterdam in 1828, and remained good friends with Ingres and his wife throughout their lives.Sadly, Charlotte-Madeleine Taurel suffered from both physical and mental illness, and traces of this are evident in Ingres’s well-known, later portrait drawing of her at the age of about five, clinging to a sheep, which is today in the Louvre. In June 1829 Charlotte and her brother Charles-Edouard were taken by their mother to Paris, where they stayed with Ingres and his wife. Charlotte was entrusted to the care of Les Dames du Sacré-Coeur for medical treatment, but died soon afterwards. Her funeral was held in Montparnasse in February 1830.The present sheet was engraved by the sitter’s brother, Charles-Edouard Taurel, for his 'L’Album T', published in a limited edition of 125 copies in 1885. 'L’Album T' was intended as a souvenir of the wedding album presented to Taurel’s parents at the time of their marriage in Rome in 1819. The original drawings in the wedding album, by Ingres and other artists, had been dispersed in 1859, and the Album T contained engravings after some of the more important drawings from the album. The final engraving in the book, by Charles-Edouard Taurel, reproduces the present drawing by Amable-Paul Coutan, and serves as a moving testament to the engraver’s elder sister, who died at the age of nine.

A Portrait of Charlotte-Madeleine Taurel as a Baby, in the Gardens of the Villa Medici in Rome