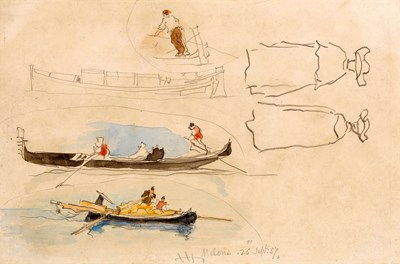 A Sheet of Studies of Gondolas and Figures Sold


James Holland made his first visit to Venice in 1835, and enjoyed a lifelong fascination with the architecture of the city. He first exhibited a watercolour view of Venice at the Old Water-Colour Society in 1836 (where it was purchased by John James Ruskin, the father of John Ruskin), and he continued to show Venetian subjects throughout his later career. A photograph of another page from the same 1857 Venice sketchbook, depicting fishing boats moored on a quayside and dated October 3rd, 1857, is in the Witt Library, London.

A Sheet of Studies of Gondolas and Figures