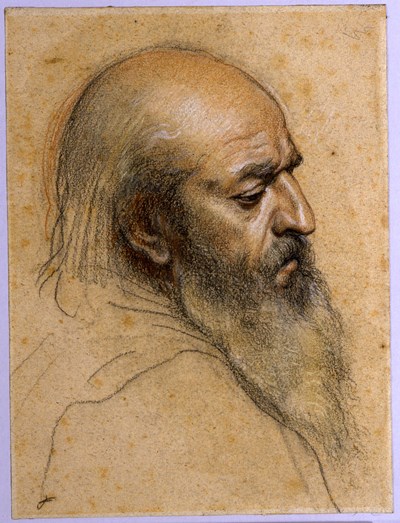 The Head of a Bearded Old Man, Looking Down to the Right Sold


This fine sheet is a study for the turbanned head of a bearded man standing at the left of Alexandre Hesse’s large painting of The Feast in the House of Simon the Pharisee, in the choir of the church of Saint-Julien in Chevry-en-Sereine, near Nemours. Signed and dated 1863, the painting is one of four mural scenes from the life of Christ commissioned in May 1861 by Mme. Amélie Brisson, owner of the château at Chevry-en-Sereine and a longstanding patron of the artist. Also included in the commission for the decoration of the church, for which the artist received 20,000 francs, were nine paintings of standing saints and a design for a stained-glass window. A number of other preparatory studies for The Feast in the House of Simon the Pharisee are among the large group of drawings by the artist left to the Ecole des Beaux-Arts in Paris at his death in 1879. Studies for the figure of the Magdalene and for the feet and hands of Christ were on the art market in Paris in 1979, while a large-scale compositional study for the entire painting, rapidly drawn on papier calque, is also in the collection of the Ecole des Beaux-Arts. Another preparatory study for the head of the same bearded man, also without a turban, was on the art market in Paris in 1979.

The Head of a Bearded Old Man, Looking Down to the Right