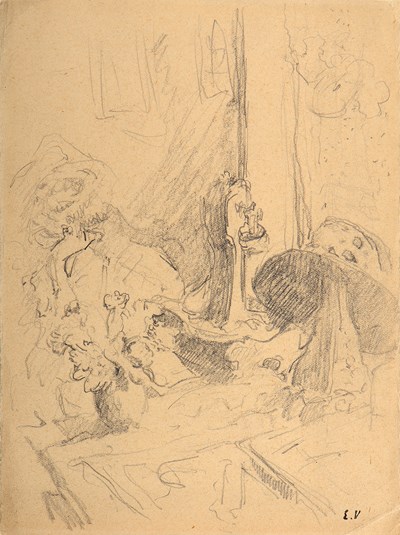 Mme. Hessel on the Telephone Sold


Datable to around 1917, the present sheet is drawn on a page from a sketchbook. With its lively, sketchy manner, is typical of Vuillard's drawings made in preparation for a painted portrait or interior; the artist would diligently assemble a large number of these small sketches of various details and motifs, from which he would develop a final, complete composition. This drawing depicts Lucy Hessel, the wife of Vuillard’s principal agent and dealer Jos Hessel, in the Hessel home in Paris. The Hessels were close friends of the artist, and throughout the latter part of his career, over a period of almost forty years, Lucy Hessel was to be Vuillard’s muse, model and lover. This pencil sketch may be related in particular to a painting of 'Mme. Hessel Telephoning', formerly in the André Goldet collection and today in a private collection in Paris. In both the drawing and the painting, Lucy Hessel is depicted with the telephone receiver to her ear, while the same side table, hat stand and vase of flowers appears in both works. As Antoine Salomon and Guy Cogeval have noted of the painting, ‘The posture Vuillard has reserved for [Lucy Hessel] is something of a caricature...She would probably spend hours on the telephone.’Vuillard painted two other paintings of Lucy Hessel on the telephone, one in a private collection in Switzerland and the other now lost. The present sheet may be compared stylistically to a preparatory study for the latter painting, possibly from the same sketchbook, in a private collection.

Mme. Hessel on the Telephone