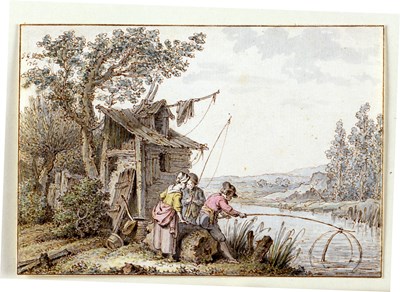 Landscape with Two Fishermen and a Woman Sold


As a draughtsman, Wille is best known for his drawings in red chalk and pen and ink, although he also produced a number of charming small-scale watercolours, of which this is a particularly fine example. Similar studies of fishermen and women occur throughout Wille’s drawn oeuvre; one such example, in pen and ink alone, is in the Louvre, which contains the largest extant group of drawings by Wille. The collection of the Louvre also includes three albums of comparable genre and anecdotal scenes in watercolour by Wille, in which similar subjects may also be found.

Landscape with Two Fishermen and a Woman