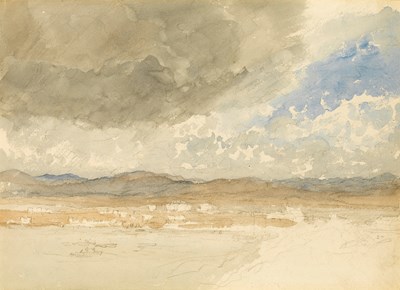 A Coastal Landscape in North Wales, with an Approaching Squall Sold


This wonderfully loose but controlled watercolour is typical of David Cox’s late work of the early 1850’s, when he was at his most confident and impressionistic. (Indeed, Cox’s studies of seashores of this period have been likened to the work of Eugène Boudin.) Scott Wilcox’s comments on a stylistically similar watercolour of the same period in the Yale Center for British Art may be equally applied to the present sheet: ‘it would seem to belong to a group of watercolors from the late 1840s and early 1850s in which Cox, aiming to satisfy himself and a group of knowledgeable and sympathetic friends – if not a broader public – put aside notions of conventional finish. Taking up one of his favorite compositional types, he has treated all its standard elements...with great freedom and economy. Most impressive is the sweep of the cloud-filled sky, achieved with a vigorous but marvelously controlled touch.’This watercolour is likely to have been executed on one of the artist’s yearly visits to North Wales. Cox made his first visit there in 1818, and became a regular visitor to the area, eventually contributing illustrations to Thomas Roscoe’s Wanderings and Excursions in North Wales, published in 1836. From the mid 1840’s onwards Cox spent part of almost every year in North Wales, based in Betws-y-Coed in the Conway valley. The pencil sketch of Conway Castle and Thomas Telford’s Conwy Suspension Bridge, completed in 1826, on the verso of this watercolour would suggest that the recto may depict a view on the Welsh coast, or perhaps on the estuary of the river Conway.

Provenance:
The studio of the artist, and by descent to his granddaughter until 1904Walker’s Galleries, London, in 1960John Appleby, JerseyThence by descent until 2010.

A Coastal Landscape in North Wales, with an Approaching Squall