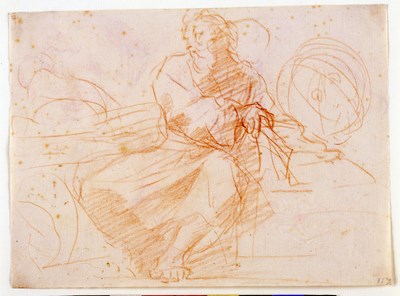 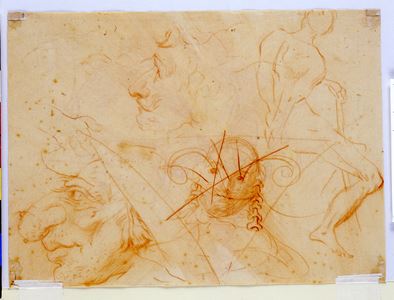 A Seated Figure of the Physician Crinas [recto]; A Seated Male Nude and Studies of Three Heads, One a Caricature [verso] Sold


Although contemporary sources such as Cesare Malvasia note that Emilio Savonanzi was a prolific draughtsman who attended the drawing academy at the Palazzo Barberini in Rome and often won prizes for his drawings, surviving examples of his draughtsmanship are rare. Previously attributed to Annibale Carracci, the present sheet was correctly identified as a drawing by Savonanzi by Hugh Macandrew in 1978. It is a preparatory study for a lunette fresco of the physician Crinas of Marseilles in the Old Pharmacy of the Collegio Romano, the Jesuit seminary in Rome. Painted between 1629 and 1630, the decoration of the room was a collaboration with the Roman painter Andrea Sacchi, with Savonanzi painting ten lunette frescoes of the founders of medicine, botany and pharmacy on the walls while Sacchi was responsible for a ceiling fresco of the Virgin and Child with Four Saints.Crinas of Marseilles was a physician who believed that illness was related to astrology, hence the addition of a large globe or armillary sphere in both the fresco and this preparatory drawing. While the position of the legs of Crinas are similar in both the drawing and the fresco, this drawing differs from the fresco in the positions of the torso and hands of the figure, the glance of the figure and the position of the globe. The various studies in red chalk on the verso include a caricature head in profile, and reveal an interest in caricature shared by other artists of the period, such as the Carracci, Guercino, Pier Francesco Mola and Bernini.

A Seated Figure of the Physician Crinas [recto]; A Seated Male Nude and Studies of Three Heads, One a Caricature [verso]