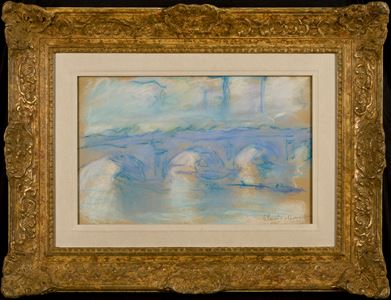 
This previously unknown study of Waterloo Bridge is a significant addition to the small corpus of pastels produced by Monet during his third and final stay in London in 1901. This group of pastels may be dated to the end of January and the first few days of February 1901. In all, twenty-six pastels from Monet’s third visit to London in 1901 are known, including sixteen views of Waterloo Bridge, and to these may now be added the present sheet. Like many of the London pastels, the artist has here used a pale oatmeal paper, which sets off the cool blues of the pastel, though other examples are on grey or bluish paper. In its looseness of handling and the delicate, almost vaporous quality of the pastel itself, this pastel may be compared stylistically with a pastel drawing of Waterloo Bridge in the Villa Flora in Winterthur in Switzerland and another in the collection of the Triton Foundation in Holland, as well as a pastel study of Waterloo Bridge in the Musée d’Orsay.The present sheet, signed in full by the artist, was almost certainly regarded by Monet as a finished work of art, to be sold to a collector or given as a gift to a friend. This is true of almost all of the London pastels, and it is interesting to note that, despite having been produced simply to occupy his time while waiting for his painting materials to arrive, these works on paper appear to have been held in high regard by the artist. As Kendall has pointed out, ‘almost all of Monet’s pastels are emphatically, self-consciously constructed within the rectangle of the sheet, as were his oil paintings within their respective canvases. Executed with considerable flair…in virtually every instance Monet’s image has been developed and resolved to the point where he could sign it as an achieved work of art. The notion that Monet saw each of his pastels as equivalent of a small oil painting, limited in scale but proportionately worthy of attention, helps to explain something of their distinctive character.’Monet’s London pastels of 1901 were his last works in the medium, which he does not seem to have taken up again after his return to France. At least half of the London pastels seem to have left Monet’s studio before his death, having been presented or sold to collectors and dealers. While one or two were included in exhibitions before the Second World War, it was not until after the war that, as Richard Kendall notes, ‘the pastels slowly began to enter the canon of Monet’s acknowledged achievements.’ This splendid pastel view of Waterloo Bridge, previously unpublished, is a magnificent addition to this small but significant facet of Monet’s late draughtsmanship.