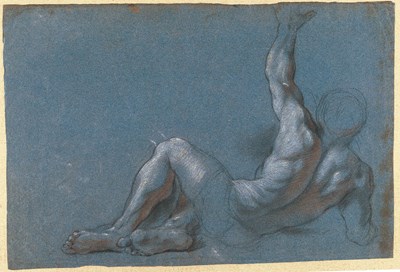 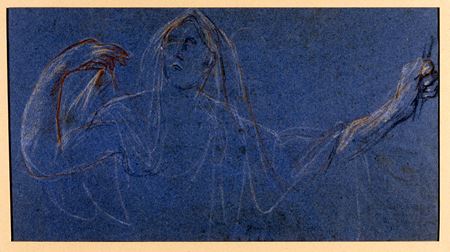 A Seated Male Nude, Seen from Behind, Reaching Up with His Left Arm [recto]; Study of a Veiled Figure [verso] Sold


The recto of this sheet is a preparatory study for Antoine Coypel’s large painting of Bellerophon, Mounted on Pegasus, Battling the Chimera, probably one of the artist’s last works and now lost. The painting is listed among Antoine Coypel’s unfinished works (‘tableaux en désordre’) in the catalogue of the posthumous sale of the contents of the studio of his son Charles-Antoine Coypel in 1753, where it is described as ‘Un très grand tableau, représentant Bellérophon combattant le chimère’. The composition, known from a preparatory study in black and red chalk in the Louvre, depicted the hero Bellerophon, mounted on the winged horse Pegasus, thrusting a spear into the mouth of the Chimera below him, with Minerva seated in clouds at the left and Neptune with his trident standing on a shell chariot at the right. The figure in the present sheet is seen at the lower right of the compositional study in the Louvre, which also houses another study for the same figure, drawn in black chalk alone and squared for transfer. Also in the Louvre is a study in trois crayons for a triton, which is preparatory for another figure in the lost painting of Bellerophon.The veiled, draped figure sketched on the verso of the present sheet may be tentatively related to the allegorical figure of Religion in an engraving of Louis XIV with Religion, Guile and Strength, designed by Coypel and engraved by Bernard Picart in 1709.

A Seated Male Nude, Seen from Behind, Reaching Up with His Left Arm [recto]; Study of a Veiled Figure [verso]