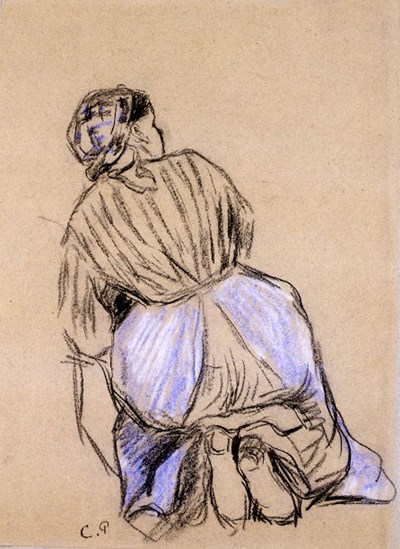 Study of a Kneeling Washerwoman, Seen from Behind Sold


This drawing is a preparatory study for one of the kneeling washerwomen in Pissarro’s painting Shepherd and Washerwomen at Montfoucault, signed and dated 1881, in the Mohamed Mahmoud Khalil Museum in Giza, Egypt. The painting was exhibited, as Le berger et les laveuses, at the seventh Impressionist exhibition in 1882, where it was one of several canvases by the artist in which peasant women were particularly prominent. As one critic noted of the painting in a review of the exhibition, ‘Pissarro places his peasant women in front of the actual work they are doing: here they are washing on the banks of a watercourse, their sleeves rolled up, the small of their back straining, their hands red, they are caught working and are gloriously real.’ In another review of the ‘7me Exposition des Artistes Indépendants’, the critic Ernest Chesneau wrote of Pissarro’s exhibited paintings, which included the Khalil picture, that ‘Since Millet, no one has observed and depicted the peasant with such powerful vigor and with this accurate and personal vision’, while J.-K. Huysmans added that ‘Pissarro exhibits an entire series of peasant men and women, and once again this painter shows himself to us in a new light...He paints his country people without false grandeur, simply as he sees them. His delicious little girls in their red stockings, his old woman wearing a kerchief, his shepherdesses and laundresses, his peasant girls cutting hay or eating, all are true small masterpieces.’ Similar sentiments have been expressed by more recent scholars when discussing the Khalil painting in particular; ‘Two peasant women kneeling beside a stream have turned stiffly in unison to look up at the calm, imposing figure of a shepherd. Caught in the low rays of the setting sun, the figures seem frozen in a timeless tableau, suggestive of the dignity of their traditional tasks. It was doubtless this quality that led the critic Chesneau to compare Pissarro to Millet, a comparison that Pissarro rejected with heat and humor.’ The scene depicted in the painting takes place at the edge of the pond near the farm of Montfoucault, near Mayenne in eastern Brittany, owned by Pissarro’s close friend Ludovic Piette. The artist and his family made a number of visits to Montfoucault between 1864 and 1876. It should be noted, however, that the Khalil Shepherd and Washerwomen at Montfoucault must have been painted in the Pissarro’s studio at Pontoise, since in 1881 he had not been to Montfoucault for several years. The composition of the painting is in fact derived from a canvas painted at Montfoucault five years earlier, in 1876, in which, however, only one washerwoman is shown. While the pose of the woman in the present sheet is superficially similar to that in the 1876 painting, it is closer to the figure in the later work.

Study of a Kneeling Washerwoman, Seen from Behind