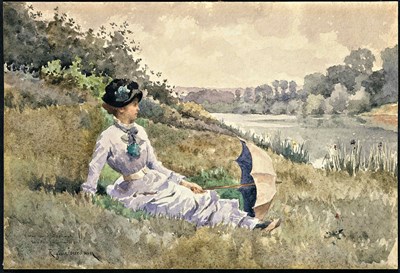 A Young Woman Seated on a Riverbank Sold


A member of the Société des Aquarellistes Français, Jourdain was a gifted watercolourist. The present sheet may be a portrait of the artist’s wife, Henriette Roger-Jourdain (d.1928), the daughter of the painter Henri Moulignon and a noted beauty. An elegant society couple, the Jourdains were at the centre of the Parisian art world of the 1880’s. They lived on the Boulevard Berthier, where among their neighbours was Sargent, who drew a somewhat similar watercolour of Henriette Jourdain lying on the grass with an open parasol resting beside her1. Mme. Jourdain was also painted by both Giovanni Boldini and Paul-Albert Besnard, whose full-length portrait of her was exhibited at the Salon of 1886 to considerable acclaim.

Provenance:
Given by the artist to a friend (Businach?).

A Young Woman Seated on a Riverbank