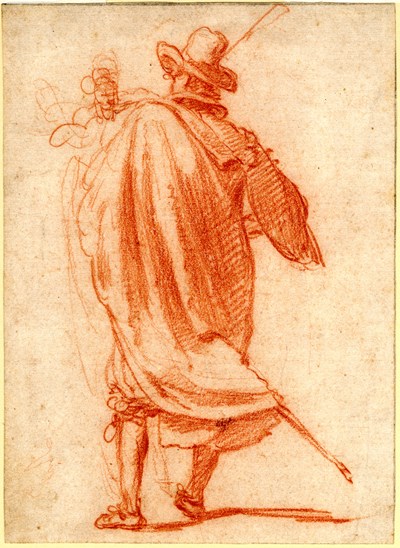 A Standing Cavalier, Seen from Behind Sold


The present sheet may be related to an important group of six drawings by Jacopo Confortini, all of which are studies for a composition of Musicians Playing to a Dining Couple. A highly finished watercolour drawing in the Uffizi represents the final stage of the composition, dominated by a seated musician playing a large stringed instrument known as a chittarone. Although the cavalier in this study does not appear in the Uffizi drawing, the same figure can be seen at the right edge of an earlier compositional drawing for the Musicians Playing to a Dining Couple, where the scene is placed outdoors, in the collection of the Klassik Stiftung in Weimar. In a second compositional study, formerly in the Benno Geiger collection in Venice, Confortini discarded the figure of the cavalier and placed the scene in an interior. Another composition drawing, close to the ex-Geiger sheet, was on the London art market in 1978, while a red chalk drawing of three musicians, apparently a first idea for these figures in the composition, is in a private collection in New York. The number of surviving studies for this composition suggests that Confortini may have been working towards a finished canvas, although no such painting survives. Displaying the influence of Jacques Callot, this group of drawings has been dated to around 1630, at the onset of the artist’s independent career.

A Standing Cavalier, Seen from Behind