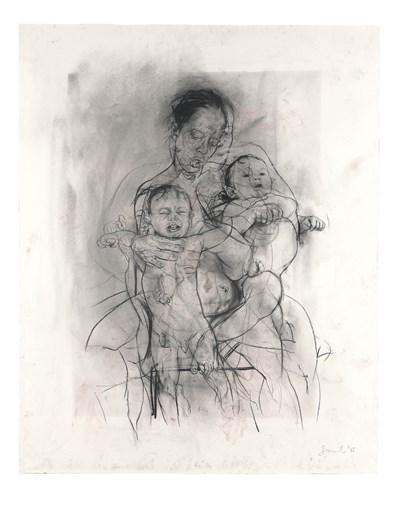 Mother and Children (After the Leonardo Cartoon) Sold


This monumental charcoal drawing is a study for Jenny Saville’s painting The Mothers, completed in 2011 and today in a private collection. Depicting the pregnant artist holding two squirming babies, the canvas is part of a recent group of large-scale paintings and drawings that reflect a new interest in portraying the intimacy of pregnancy and motherhood. Saville gave birth to her first child, a son, in 2007, followed by a daughter in 2008, and the experience of motherhood soon found expression in her work. The artist made paintings and drawings of herself throughout her pregnancies, and also asked several expectant mothers to model for her while working on this series of compositions. Saville has recently described the genesis of these works: ‘I had thought about doing mother-and-child images because I have never done anything with children before. I’ve tried to stay away a little bit, about the issues surrounding biology being determinate and that women are here to have babies. But, it’s so powerful and I thought, well, I quite like tackling grand, old subjects. It’s a challenge to make a painting with a child that isn’t sentimental. It’s a real challenge to actually make the sort of physicality of a baby’s body, and not be cutesy and Baroque and bubbly; to find a dynamic within the body. Children are quite animalistic and that is difficult to create.’ Simon Schama has aptly characterized this new series of mothers and children by Jenny Saville in a review of a recent exhibition of her work: ‘...take a look at what Saville has done with her astounding paintings and drawings of her naked self with her baby boys exploding every which way from arm and lap...Not since Leonardo (whose own studies were a departure point for Saville) and Rembrandt has an artist got the peculiar body language of very small children exactly right. One of the baby boys arches his back in precisely that pre-tantrum power-moment no parent is likely to forget; others have the juicy-lipped, groggy fullness of the milkily sated...To convey the whirl of them in motion, the storm of fidget, Saville has done something so simple, so brilliant and yet so unprecedented that once you’ve seen it you can’t believe no one arrived at the idea before. She has retained all the drawn pentimenti of possible positions for the infants into the eventual painting or drawing, so that the same image contains within it a baby boy asleep, another in a tensed tantrum, another hanging loose, another in arms, another tumbling away...Saville has created movie animation for modern art and the effect is liberating, exhilarating, dumbfounding in the best possible way.’ Like other works from this series, this drawing is inspired by Renaissance images of the Virgin and Child, and in particular Leonardo da Vinci’s large cartoon of The Virgin and Child with Saint Anne and Saint John the Baptist, also known as the Burlington House Cartoon, in the collection of the National Gallery in London. Leonardo’s monumental drawing is thought to be a cartoon for a now-lost painting, and has been dated to c.1499-1500. As Saville has recalled, ‘I have quite a personal relationship with Leonardo da Vinci, because my parents had a very small reproduction, about 20 cm by 25 cm, of the Burlington House Cartoon. I moved house quite a lot as a child and that used to reappear quickly, so that was my permanence – the drawings I made that I carried around, and this image. I used to go and see it when I went to school, so it became a powerful icon in my life.’ This exceptional drawing highlights Jenny Saville’s brilliant, self-assured draughtsmanship. As one recent scholar has noted of the artist ‘In her drawings related to Leonardo’s work, she suggests a changing sense of perspective by her varied marks that rise up in passages to define the figures in changing proportions. At the same time, these abundant marks obscure the figures as they radiate out across the paper or canvas support.’ As Saville herself has said of these recent graphite and charcoal drawings, ‘in this series, I’ve embraced drawing in a new way. I’m a bit more confident.’Mother and Children (After the Leonardo Cartoon) may be grouped with a handful of equally large drawn studies by Saville of pregnant women with baby boys, mostly executed between 2009 and 2010, which find their inspiration in Leonardo’s Burlington House Cartoon. While some of these are drawn in pencil on fairly sizeable sheets of vellum, others are, like the present sheet, drawn in pencil or charcoal on much larger sheets of paper. Dated 2008, this drawing is one of the earliest of this group.In a recently published article, Jenny Saville has stated that ‘Leonardo’s sketch for the Burlington House Cartoon – I call it the Black Mass drawing – is, I think, the greatest drawing ever made in the history of art. It really pre-empts everything that happens in art all the way up to abstraction. I never tire of looking at it. I have it around me all the time. You see it in Giacometti, you see it Auerbach now, this sort of energetic mass of forms. It shows you – to the most extreme level – what Leonardo could do, which was internal structure mixed with movement. I think that the intelligence of the artist is shown in the drawing. His lifelong curiosity has always been something I really loved: his desire to see something through drawing, to understand something himself rather than just relying on other sources.’ And, as she also points out, ‘There’s no one better to look at when you’re learning how to draw than Leonardo.’

Mother and Children (After the Leonardo Cartoon)