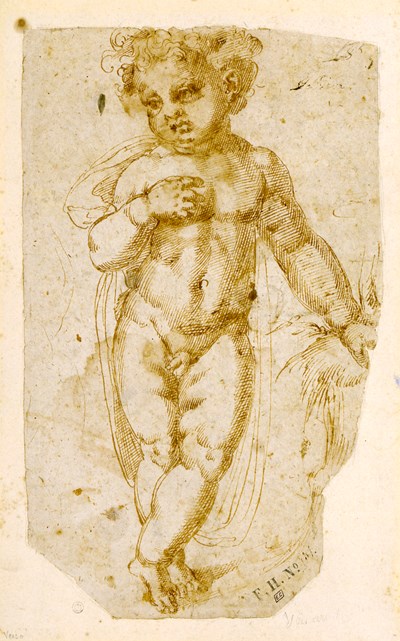 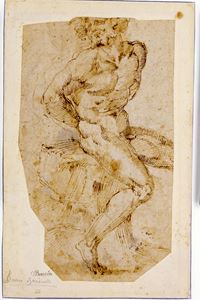 Study of a Standing Putto [recto]; A Male Nude Bound to a Rock [verso] Sold

Pen and brown ink on buff paper, irregularly trimmed at the edges and inlaid on an old backing sheet. Illegibly inscribed and numbered at the upper right. Inscribed Baccio and Baccio Bandinelli on the verso of the backing sheet.284 x 171 mm. (11 1/8 x 6 3/4 in.) at greatest dimensions.


Although somewhat larger in scale, the study of a chubby putto on the recto of this drawing can be likened to a number of drawings by Bandinelli of groups of standing infants, of which examples are in the Fondazione Horne in Florence and the Städelsches Kunstinstitut in Frankfurt; a third was on the art market in 1998 and is now in a private collection. Drawings such as these appear to have been inspired, if perhaps indirectly, by similar putti in the public sculpture of Bandinelli’s illustrious predecessor, Donatello. In particular, Bandinelli’s drawings of putti are similar to their counterparts in the frieze of putti at play running above the main scenes of Donatello’s bronze pulpit reliefs for the church of San Lorenzo in Florence, executed in the early 1460’s although not installed in the church until 1515.The study of a bound prisoner on the verso of this sheet may be associated, as Roger Ward has suggested, with several drawings of captive male nudes by Bandinelli, which, in turn, have been related to a bronze relief of The Deposition presented by the sculptor to the Emperor Charles V in Genoa in 1529. Described by Vasari as an ‘opera rara, e’ la fece con gran diligenza gettare di bronzo’, Bandinelli’s relief is now lost, although its appearance survives in a gesso modello in the Museo di Stato in San Marino, as well as in a bronze relief copy by Antonio Susini - probably made from a wax cast of the original - in the Louvre. While none of these drawings of captive nudes by Bandinelli - including studies in the Uffizi, the British Museum, the Louvre, the Nasjonalgalleriet in Oslo and a private French collection - repeat precisely the pose of the crucified thieves in the bronze Deposition relief, all depict bound male figures posed in violent contrapposto. Each of these powerful drawings are, as Ward has described them, ‘executed in that bold and urgent style that is the quintessence of [Bandinelli’s] pen technique in preparatory designs.’The present sheet once belonged to Jean-François Gigoux (1806-1894), a painter and lithographer who assembled a large and significant collection of paintings and drawings. Many of these were presented to the museum in his native town of Besançon, but others were dispersed in a series of auctions between 1861 and 1882. The drawing was acquired at the last of these sales by the collector Emile Calando (1840-1898), in whose family it remained until 1927. The drawing later entered the collection of Sir Kenneth Clark, later Lord Clark of Saltwood (1903-1983).

Study of a Standing Putto [recto]; A Male Nude Bound to a Rock [verso]