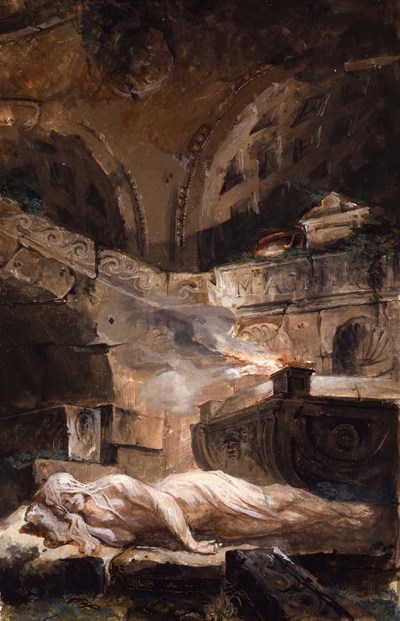 A Vestal Virgin Reclining by a Holy Flame Sold

Brush and brown ink, with brown and grey wash, heightened with white, red, green and grey gouache, over an underdrawing in black chalk. The composition set within a fictive mount, drawn with a brown wash border and brown framing lines.442 x 294 mm. (17 3/8 x 11 5/8 in.) [sheet]ACQUIRED BY THE MUSEUM OF FINE ARTS, BOSTON, MASSACHUSETTS.


This fascinating drawing, whose unusual subject may perhaps be based on a literary source, remains unrelated to any known painting or print by Giovanni David. With its hint of a Roman setting (one may note the inscription M. AGRIPPA, akin to that found on the facade of the Pantheon, on the wall behind the figure), the drawing may be dated to the period following the artist’s stay in Rome in the early 1770’s. In mood and effect, as well as in the vaulted setting of the scene, the drawing finds parallels in such prints by the artist as Daedalus and Icarus and Isabella and Rodomonte, both part of a series of etchings executed in 1775 and dedicated to Giacomo Durazzo, or a putative Allegory of Albert of Saxony(?) of about the same date. In style and technique, the present sheet may also be compared with such drawings by David as a Scene of Witchcraft, in an American private collection.

A Vestal Virgin Reclining by a Holy Flame