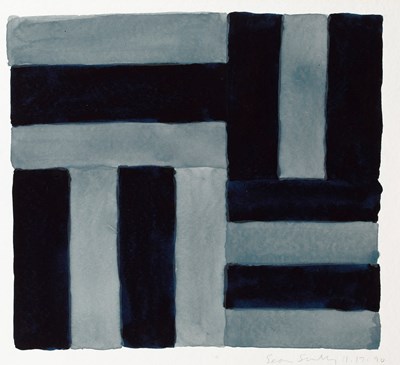 
Over the course of his career, Sean Scully has created a significant body of works on paper – watercolours, pastels and prints - alongside his paintings on canvas. He has referred to his works on paper as ‘complements and antidotes’ to the paintings, and has further noted that ‘the watercolors are very, very personal to me.’ More recently, Scully elaborated on the importance of his watercolours to him: ‘There’s a big difference between them [paintings and watercolours], the difference between public and private. Because I do things all the time for the public, so there can be exhibitions and people and go and see the paintings. The watercolours are more private…But I don’t think any of my work is private anymore. It’s just a different degree, and it’s something I can have and put in a drawer and get the sense at least for a while that I have made it entirely for myself. But of course it’s only a question of time before that little watercolour has to come out of the drawer and go somewhere for an exhibition.’The present sheet was executed in 1990, and is part of a group of paintings, watercolours, pastels and prints known collectively as the Wall of Light series. These works evolved following a trip Scully took to the Yucatán Peninsula in Mexico in 1983, where he was captivated by the appearance of the stacked stone walls of Mayan ruins. He produced a number of watercolours during this trip that were his first attempts in the medium, and these served, several years later, as the basis for the Wall of Light series. Indeed, the artist refers to these irregular rectangles of colour in these works as ‘bricks’; a conscious move away from the broad bands and stripes of colour of his earlier paintings.Scully’s watercolours often treat the same themes as his paintings, yet differ from them. On relationship of a watercolour to a painting of the same composition, the artist has commented that ‘One could say it’s a version of the same thing in a different medium, which produces an entirely distinct reality. Because the watercolour is really only staining the paper. You’re working with the light within the watercolour, and you’re trying to articulate that light.’ He has further elaborated on this theme in a 1995 interview, in which he stated that ‘the watercolors are about the extreme absence of physicality. They are really as close as a painter can get to pure light, an effortless, physically effortless vision. And that’s what’s really interesting about them to me...I think the idea of the lack of physicality in the watercolors is crucial to their nature, that the white paper is shining through the watercolor the whole time. And it’s pure pigment, it’s pure pigment suspended in a small amount of gum Arabic and it’s floated onto the paper.’Of the Wall of Light watercolours, of which this is a particularly fine and fresh example, one scholar has noted that ‘Graceful and seemingly effortless, these are works Scully says he pursues chiefly for himself as “private” entities. He makes them in a relaxed state of mind, focusing chiefly on the quality of light, and he renders them without vigorous physical action…Scully arrives at a remarkable elegance while working in a delicate, extremely temperamental medium…His Wall of Light watercolors are poetic studies of light, with a quiet undertone and a subtle, rhythmic quality alive with luminosity.’

Provenance:
Galerie Lelong, ParisAcquired from them by a private collector.